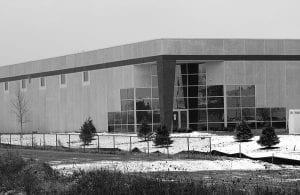 This 50,000 square foot ‘spec’ building just west of Ohio 79 in Hebron has been leased by Goodyear Tire and Rubber. The research and development facility will initially employ 30 primarily technical workers. Beacon photo by Charles Prince.

HEBRON – Goodyear Tire and Rubber is bringing a new research and development center and 30 technical jobs to the village.

Robert O’Neill of Southgate Corporation and Dan Evers of GROW Licking County made the announcement to village council members at a special council meeting Monday night. Calling it the “worst kept secret,” O’Neill said Goodyear is moving into Southgate’s 50,000 square foot building on Integrity Drive, south of McDonald’s. The spec building – built without a tenant commitment – will be ready for Goodyear sometime in February. The building can be expanded up to 150,000 square feet.

Goodyear personnel are already on site. O’Neill said they will be installing a lot of equipment and he expects them to be in operation sometime next summer. “There are plans for growth,” he added. Most workers will have technical degrees.

“This is a high-end project,” Evers said. Goodyear conducted a comprehensive search that started about a year ago. Both he and O’Neill thanked village officials for their help and patience. “I think they (Goodyear) will be a wonderful addition to the community,” O’Neill said.

In other business Monday night, Mayor Clifford L. Mason administered the oath of office to Tom Marietta. The Board of Planning and Zoning member will fill the rest of the late Pam DeVaul’s council term. His onevote victory over former council member Erin Finkes in a writein vote for a full four-year term beginning Jan. 1, was certified Monday by the Licking County Board of Elections. Finkes could request a recount in the narrow 42-41 race which could affect who serves the new four-year term.

The contract calls for Hebron to receive 100 percent of the fire levy revenue generated in its service area which is the unincorporated area of the township south of the railroad tracks and the Village of Hebron. Hebron property owners will begin paying the township’s additional 1.5 mill fire/EMS levy next year in addition to the village’s two fire levies.

Mason, council members and fiscal officer Deborah Morgan are concerned about the lack of a specific revenue number in the contract. Hebron’s commitment to provide the service is airtight while the revenue to paid for it is not. Several council members pointed out that two of the township’s three fire levies will have to be renewed during the five-year contract period to maintain revenue. Others noted that revenue estimates based on the service area split are still preliminary.

Mason and some council members are also concerned about provisions restricting the use of township fire levy and EMS billing revenue to operations for the entire five years. Council members unanimously approved a motion authorizing the mayor to extend the current contract for an additional 60 days starting Jan. 1, 2014, at the current terms and conditions to eliminate any concern trustees may have about service while a new contract is being discussed. Mason will present the extension to trustees at their Dec. 2 meeting.

Council members are expected to approve a revised draft at their Dec. 11 council meeting which then will be presented to trustees at the Dec. 12 meeting set after the Nov. 14 meeting.