ODOT projects are on schedule, but Canal Road remains closed 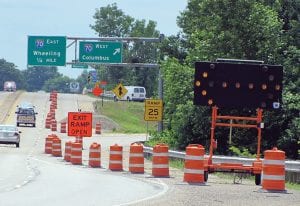 BUCKEYE LAKE, HEBRON – Two major area construction projects remain on, or even ahead of schedule, although it’s currently not known when Canal Road will re-open.

As contractors work to update the I-70 and SR 79 interchange, Buckeye Lake Village officials were concerned that the eastbound entrance ramp onto SR 79 from I-70 would be closed, interfering with traffic going to the popular BLASST fireworks display July 3.

“The southwest ramp was re-opened last week, six days ahead of schedule,” said ODOT District 5 spokesperson Lauren Holdsworth. “ The planned closure was 14 days, but work was completed in eight days.” She said the contractor is currently working on the deck overlay on the SR 79 northbound section, south of I-70. Exit 129 A (79 northbound ramp) is planned to be closed July 15 for the widening of the ramp for the addition of a new left turn lane. The overall interchange project, said Holdsworth, remains on schedule. 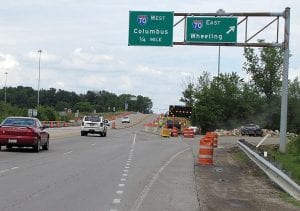 Previously, ODOT District 5 P lanning Engin eer Ty Thompson said the interchange reconstruction project would be completed in six phases. According to the District 5 web site, the I-70/Ohio 79 interchange is a full cloverleaf interchange, which requires vehicles to maneuver between traffic exiting and entering the highway, causing some severe sideswipe and run-off-the-road crashes.

Similarly, all westbound I-70 traffic exiting to Ohio 79 will use the ramp that currently directs traffic toward Hebron. A new traffic light will allow that traffic to go either to Buckeye Lake or Hebron.

Thompson said there would be ramp closures during construction, but no more than one ramp will be closed at a time and closures will last one to two weeks each. Also, ODOT will repair and improve six bridges within the interchange’s immediate vicinity. Thompson said the project won’t have much impact on I-70 traffic, and much of what will impact I-70 would be completed at night.

Thompson said there would always be one lane of traffic open both directions on Ohio 79.

The contractor for this $2.3 million project is Double Z Construction, from Columbus, Ohio, and completion is set for Dec. 31.

Holdsworth said the project to replace the I-70 overpass crossing Canal Road is currently underway and on schedule. However, Canal Road remains closed at this time for work to take place and the time of its reopening is currently unknown. 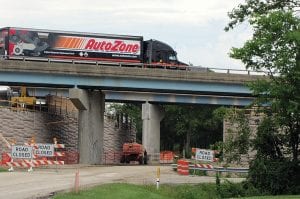 Previously, Union Township Trustee John Slater said replacing the I-70 bridge over Canal Road has grown into a three-phase project. He said a fatal accident and problems getting pre-cast pieces to meet specifications have affected the project’s schedule. Consequently, Canal Road will be closed longer than originally anticipated. The entire project could be completed much earlier than the original summer of 2014 date.

Slater said a major engineering problem has come up with the line of sight for drivers coming off Duck Run Road. “They might have to reposition the road,” he said, adding that ODOT has taken responsibility to fix the problem.

ODOT estimates the I-70 bridge project over Canal Road will be complete November 2014.