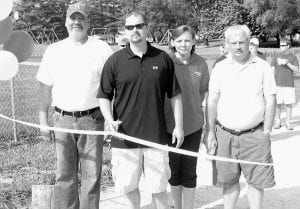 The ribbon is cut to the new Glenford Walking Trail in the Glenford Lions Club Park. From left to right are Jim Cade, Eric Correll, Theresa Hasten, and Frank Correll. Courtesy photo.

GLENFORD – Are you looking for a safe place to walk while enjoying the fresh air?

If so, the walking trails of Perry County are the place for you. The newest trail in the county has officially opened at the Glenford Lions Club Park. The trail is open from dawn to dusk.

The Glenford Walking Trail Kick-off Event took place Saturday August 15, with 63 people participating. Everyone who came received a free t-shirt and a bag which included a pedometer, walking log book, Frisbee, and more.

The event started with a short ribbon cutting ceremony with Judge Luann Cooperrider as the guest speaker and Reverend Bethel Bateson performing the trail blessing. Angela DeRolph from the Perry County Health Department and Eric Correll of the Glenford Lions Club also spoke about the trail.

A Glenford Walking Club is starting with 16 people already signed up for the club. The first official meeting date will be announced soon.