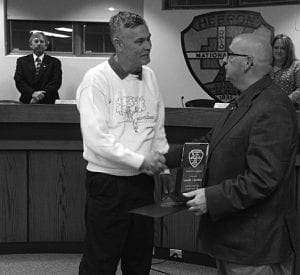 HEBRON – Village council members and employees thanked Mayor Clifford Mason and Council President Bob Gilbert for their service to the village at Wednesday’s council meeting. It was the last regular council meeting for Gilbert and Mason.

Gilbert opted not to seek reelection after 16 years on council and former Village Administrator Mike McFarland narrowly turned back Mason’s bid for a sixth term.

“This is hard,” Gilbert said. “Sixteen years is long enough for me.” He thanked village employees, and past and present council members. Gilbert thanked Mason for encouraging him to apply for a vacancy. “We’ve got a lot of great people working here and serving the village.” Mason told him, “I really appreciated your steady hand.”

“We have made big strides under Mayor Mason,” council member Annelle Porter added. She thanked Mason for “his vision” and Gilbert for “his steady hand.”

In his closing remarks, Mason thanked his family for their 100 percent support. “Working with council and village employees, we have accomplished quite a bit,” he said. “Keep up the good work.” Mason recalled that when he became mayor in 1996 the village had about six hours a day of police coverage. “Now we have one of the best departments in the country.”

In other business Wednesday night, council members unanimously rejected a suggestion that the village’s engineering firm, Bird + Bull and their consultant hydrologist present their long awaited report on the village’s persistent flooding problems at a combined committees meeting next Monday. “I’m disappointed in their performance,” Mason said. He noted that the study was commissioned in August/September 2014. Mason had expected a report for the Dec. 9 meeting.

The Dec. 14 combined committees and the Dec. 23 regular council meetings were both cancelled for lack of an agenda and attendance.

Council members unanimously approved a request by the Route $0 Festival committee to hold a 5K race starting at 10 a.m. on Saturday, Dec. 19. The race will primarily be run at Hebron Evans Park but portions of Refugee and Canyon roads will have to be closed during the race. Organizers will be responsible for traffic control.

Council members also unanimously approved Village Administrator Ralph Wise’s suggestion that the village seek sealed bids for two outbuildings located a flood plain lots in Sunny Acres that the village purchased in 2012. The buildings will be sold as in with the buyer responsible for removing them within 30 days. The sale will include the stipulation that purchase doesn’t include permission to place it on their property unless it meets the applicable zoning code.

Wise also reported that the village is advertising for an engineering consultant for the North High Street sidewalk project. He said the preliminary cost estimate for 2018 project is $800,000. The village is responsible for 20 percent of the cost which is $160,000 based on the preliminary estimate.

Mason reported that the village’s Planning and Zoning Board recently accepted the final plans for a new Dollar General store. The village shopping center will be demolished next year and replaced with the new store.

Council members went into executive session to discuss the purchase of property. When they returned about 20 minutes, they unanimously directed the solicitor to prepare a resolution to amend the 2016 budget. Council members then set a special meeting for 10 a.m. on Saturday, Dec. 16, to consider amending the 2016 budget. Though the property being discussed for possible purchase was not mentioned, village officials have been discussing the purchase of the former Bowman Chevrolet property at the corner of Main and High streets for several years.