Getting Away From It All

Anglers would rather escape than catch f ish 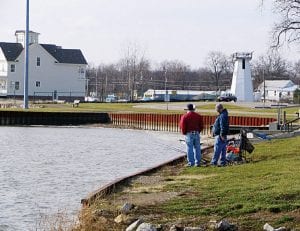 LIEB’S ISLAND- The fish weren’t biting, but neither Don Phillips nor Larry Pletcher was too concerned. “We’re just here to get out of the house,” said Phillips. “Yesterday we went golfing,”said Pletcher. The Lancaster retirees were enjoying a day of nearrecord high temperatures Tuesday morning, although the warmth arrived with strong and blustery winds. Lots of high waves jarred Buckeye Lake, which was unfortunate for anglers as the fishretreated for deeper waters.

Marty Lundquist, ODNR Division of Wildlife fisheries biologist, said he believes the water didn’t warm up enough in three or four days to make a big difference for anglers. “That said, the total catch of fishat Buckeye Lake and in Central Ohio will probably increase because more anglers will take advantage of the warm weather to get outside,” he said.

Some fishspecies more likely to bite in winter than others are bluegill, saugeye, and yellow perch, especially of the lake or body of water is frozen over, said Lundquist. “Ice fishing can be very productive. If you know where to get on top of the fish, these species can provide a lot of action.” 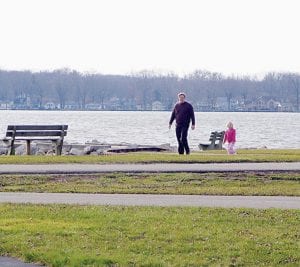 He said there are few yellow perch in Central Ohio, but there are many in Lake Erie.

In a related issue, Dawes Arboretum’s Director of Horticulture Mike Ecker, said the warm winter weather could hurt plants if the balmy temperatures continue more than a week. Buds may begin growing prematurely. “If and when we go back to sub-zero temperatures this tissue will be damaged or killed,” he said. “There is nothing anyone can do for trees and shrubs,” if this happens.

For perennials, people can place mulch or pine boughs over them to keep soil cool and slow premature growth. “Of course, the soil has to be cool in the first place or they will be holding in the warm soil temperatures instead of the cool,” said Ecker.

After fighting Tuesday’s waves and winds, Phillips and Pletcher decided to head home for the day. Their only quandary? “Now we have to figure out what to do tomorrow,” said Pletcher. 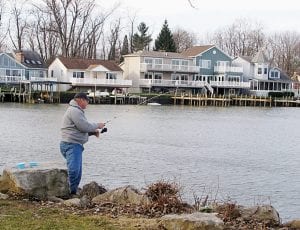 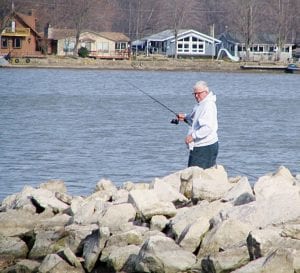