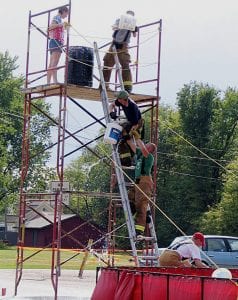 BUCKEYE LAKE – Getting wet last Sunday, a record-setting high temperature for October, was a treat.

The record heat wave didn’t keep hundreds of Buckeye Lake residents from lining Ohio 79 for the Buckeye Lake Fire Association’s annual Fire Prevention Parade. After the parade, the Association treated everyone to free food at the firestation and hosted several firefightergames for area departments participating in the parade.

At left, four-person teams competed for the best time in filling the drum on top of the scaffolding. Below two-person teams tried to blast the pony keg past the other team. It’s a lot harder than it looks. 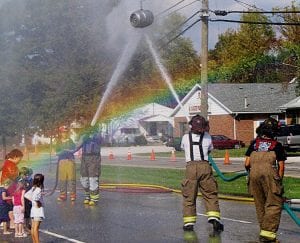