Mayor Peggy A. Wells filed 22 administrative counts against Hanzey following an internal affairs investigation conducted by the Pataskala Division of Police. That investigation was prompted by a March 10, 2018, incident at a Leisure Village home. Hanzey had called Wells that afternoon, telling her he had been released from the hospital after undergoing a procedure to remove his ring finger on his right hand. Hanzey told her he had a doctor’s release to return for light duty on March 12. Wells told Hanzey not to report to duty until she had seen the release and consulted with the village solicitor.

Wells later wrote to Hanzey, “Notwithstanding this conversation, you responded to a call in Leisure Village the evening of March 10. You decided to respond to this call despite not having delivered your doctor’s release and despite the fact that responding to a reported violent felony is far from “light duty.” I have been made aware that, while responding to this call, you accidentally discharged a firearm inside a private dwelling.”

The indictment’s first count covers the time period January 19, 2016, through June 14, 2017, stating the defendant “did knowingly gain access to, attempt to gain access to, cause access to be granted to, or disseminate information gained from access to the law enforcement automated database system created pursuant to Section 5503.10 of the Revised Code without the consent of, or beyond the scope of the express or implied consent of, the chair of the law enforcement automated data system steering committee…” The violation is a felony of the fifth degree.

If convicted of a felony of the fifth degree, Hanzey could be sentenced to a definite prison term of six, seven, eight, nine, ten, eleven, or twelve months and fined up to $2,500. His initial bond hearing is set for 9 a.m. on Tuesday, August 6. 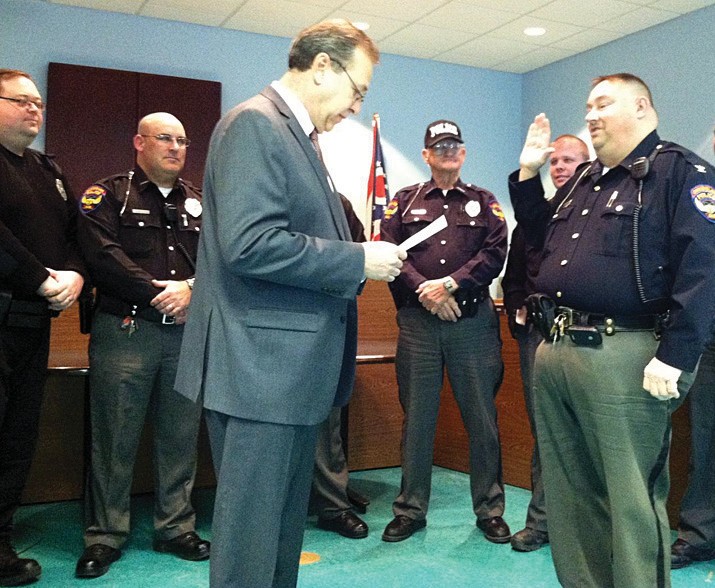 Buckeye Lake Village Mayor Rick Baker administers the oath of office to James Hanzey as he was promoted to chief of police on March 29, 2013. Courtesy photo.