Ford to be honored for 50 years service to his church, Lakewood 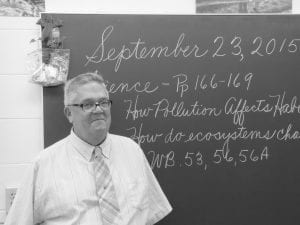 Paul David Ford will be honored Sunday for his 50 years of service to Lakewood Schools and the Hebron Christian Church. Beacon photo by Scott Rawdon.

HEBRON – Every day at work is a pleasure, even after 50 years. “I can’t wait to get back to work every Monday,” said Jackson Intermediate School social studies and science teacher Paul David Ford, who celebrates a continuous 50 years as a Lakewood teacher.

Ford attended Hebron Elementary and graduated from Lakewood High School in 1964. His desire to teach was strong, and he was hired as a fourth grade teacher for Hebron Elementary in 1966, while still taking courses in Elementary Education at The Ohio State University, Newark Branch.

He received his Bachelor of Science degree from OSU in 1974 and his Master’s degree in 1981. Staying in the Lakewood School District for his entire career, Ford has educated close to 1,500 fourth and fifth graders, as well as students in special education at Hebron Elementary, Jacksontown Elementary, and Jackson Intermediate School.

Ford remembers his first class at Hebron Elementary fondly. “What a lovely class that was,” he said. “Every class has its own challenges and wonderful things. No two days are alike.”

Ford said he’s heard other teachers say when each school year runs into the next, it’s time to stop teaching. This has never been the case for Ford, who treats each day as a new experience and never tires of his profession. “I like to help boys and girls learn how to learn,” he said, adding that he doesn’t feel “old or tired enough” to stop teaching. “Every day I’m learning with the boys and girls.”

Ford’s enthusiasm is certainly not lost on Jackson Intermediate Principal Carol Field. “This is his life,” she said. “These kids are his family. This is what makes him happy.” Field said it’s “so impressive” that Ford is still going strong after 50 years in the same profession and school district. “He wants to make it happen for kids,” she said.

Ford said he’s been very lucky in his life to have music as a passion as well as teaching. “Music’s been a nice ticket, too,” he said. For the last 50 years he has also played organ for the Hebron Christian Church. Friend Steve Douglass said of Ford, “David has served in a grateful congregation without a break for 50 years,” he said. “He has eased parishioners into a worshipful mood with his preludes, accompanied the congregation, the senior and youth choirs in their anthems, shared families’ joy at weddings, and comforted the grieving at funerals. He has also been in charge of the summer devotional music, while the church choir was absent.”

Douglass said Ford was born May 10,1946 to Robert and Maxine Ford. Ford began sharing organist duties at Hebron Christian Church in 1963 and became full time organist for the church in February, 1965.

Ford said today’s students, as opposed to 50 years ago, learn subjects at greater depth. He said students used to be taught a “wide swath” of a subject, and looked at subjects very broadly. Today, teaching goes into greater depth of a subject’s specifics. Of course, state testing has changed instruction dramatically. “It’s a little different ball game now,” he said. “We have to prepare kids for what they may face on testing.”

Ford’s greatest challenge as a teacher is technology. He said it takes some mentoring from other teachers to help him keep up with the latest and greatest changes in software and applications. “The children are natural at it,” he said.

Despite changes in technology, Ford’s favorite parts of teaching remain the same. First, he’s thrilled when a former student approaches him to thank Ford for how much he helped that former student learn to read, or had a lasting impact on the student’s life. And, teaching is extremely gratifying for Ford when, “I see a kid’s face light up when he understands something difficult,” he said. “It’s that eureka moment.”

There will be a celebration of Ford’s achievements at the Hebron Christian Church in its basement fellowship area at 11:30 a.m. Sunday, Sept. 27. A letter from Ohio Governor John Kasich will be read commemorating the event, as will a proclamation from Hebron Mayor Clifford Mason.