Focus is now on soil mixing 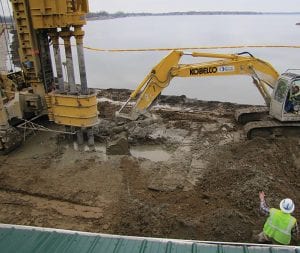 The 4.1 mile, 30+ foot wide stability berm is nearly complete. The bank run stockpiles at Lieb’s Island and the North Shore are gone. The remaining berm work is being done from the Seller’s Point staging area.

The Lieb’s Island soil mixing rig is moving a bit faster, but still seems to be averaging about 50 feet a day – well below the estimated 150 feet per day. The rig began working around Feb. 20 and as of Wednesday afternoon had passed 17 West Bank houses. That works out to be about 900 feet in two and a half weeks or about four percent of the dam.

Progress will get a boost beginning Thursday as the North Shore rig and grout plant are now in place (bottom right photo) and appear ready to get underway.

The slow pace can be attributed to the need for an excavator to almost continuously remove excess water (top left photo) as the rig drills the approximately six foot long, 40 foot deep trench. This water/grout mixture is placed bucket-by-bucket in a series of lagoons that snake along existing dam wall (top right and middle right photos). It looks like the canal has reappeared. 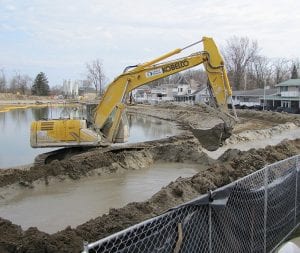 A recent equipment addition is a small dump truck that can rotate 180 degrees (middle left photo) that delivers dirt that the excavator uses to construct the containment lagoons and mix with the water/grout mixture. Working space on the berm is at a premium. Periodically, the excavator moves back down the berm, using its bucket to push the watered down grout further down the berm. As the slurry de-waters and is mixed with soil, it is finally removed and placed in a pile at Lieb’s Island where it is eventually loaded into a truck.

While a 50 percent productivity improvement might be possible – to 75 feet a day per rig, there appear to be too many steps required to address the water diluting the grout and its ultimate removal. Thanks to the lagoons, working space is now severely limited.

If both rigs could somehow achieve 75 feet per day for a total of 150 feet per day, it would take 23 weeks or nearly 6 more months working six days a week to complete the seepage barrier. 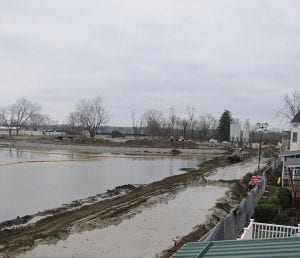 Work on creating a vehicle access point at the Buckeye Lake spillway began in earnest this week. The berm currently blocks use of the spillway, but the berm could be cut in an emergency. It appears the road fill will take about two-thirds of the initial spillway exit channel. 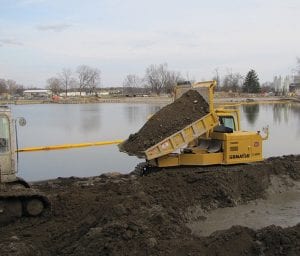 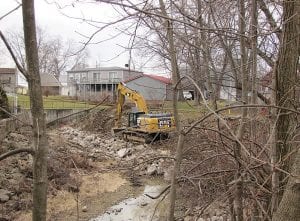 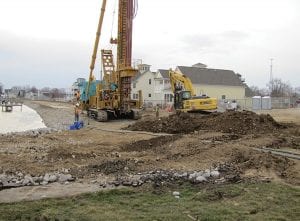