Flooding: ‘We’re trying to do everything we can’ 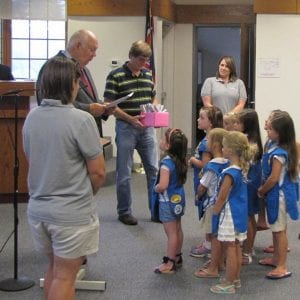 Hebron Mayor Mike McFarland, second from left, reads a Certificate of Appreciation to the leaders and members of Daisy Troop 7509 at the July 26, Village Council meeting. Council member Tom Marietta, third from left, helped McFarland distribute a certificate to each troop member. Troop leaders asked for a community project so the scouts cleaned up trash that accumulates against a fence on the eastern end of the Kroger store parking lot. Beacon photo by Charles Prince.

Samantha Morrow, from the Thurston area, was sworn in as a part-time firefighter/paramedic earlier in the day. At the beginning of the meeting, McFarland had told the young members of Daisy Troop 7509, who were being honored for a public service project, that they should set their sights high and that women could achieve anything.

During public comments, a West Main Street resident asked what is being done to prevent floods like the recent July 14-15 one.

“We are trying to do everything we can,” McFarland told him. “We are located at the bottom of a hill.”

McFarland also explained the findings from the village’s comprehensive flood study released March 15, 2016. The $20,000 study was commissioned after a March 15, 2012 “backbuilding” thunderstorm, that included hail, dumped more than four inches of rain in about hour, causing extensive flash flooding throughout the village.

Pressure to find solutions built two years later when four straight months – May through August – with at least seven inches of rain made flooding nearly routine in some areas of the village.

McFarland said the village would need $3 million for a 10- acre holding pond on the west side of the village. The village also doesn’t have the money to route stormwater around the village.

With two of three proposed solutions unaffordable that left moving stormwater through the village faster as the only viable solution, McFarland explained.

He said the village is cleaning out ditches and removing culverts that are choke points. That work is not completed as at least one critical culvert is controlled by ODOT.

During department head reports, Police Chief Larry Brooks said the village’s new Ford Explorer cruiser is now in service. One of the new features automatically shuts off the siren when the vehicle is placed in “park.” That means an officer could be heard immediately in a tense situation.

Brooks also asked for authority to spend up to $9,600 for 10 new ballistic vests. Vests last about five years and the department’s are older than that. The new ones will be lighter and more comfortable.

Brooks said they are waiting on the police garage architect to complete the design plans so they can seek bids. The plan is for a five-bay garage with an evidence room overflow or large item evidence storage area built on the eastern part of the existing parking lot just beyond the new standby generator.

The entire cost will be covered by a $175,000 bequest from the estate of Thornville resident Jack J. Artz. He left $175,000 each to Thorn Township, Thorn Township EMS, Perry County Sheriff’s Office, Millersport EMS, Licking County Humane Society and Hebron Police.

The entrance and exit at the municipal complex will be reversed this fall to accommodate the new garage and allow police to exit faster. The new entrance will be the west-most drive that is now the exit.

In his report, Village Administrator Ralph Wise said a pre- construction meeting was set for July 28 with Spires Paving prior to beginning the village’s 2017 resurfacing work.

Four bids were received in June for the estimated $100,000 project. The Lancaster-based Spires was the lowest bidder at $71,465. The streets to be resurfaced are Basin Street and portions of Mound, 2nd and Cumberland.

At council’s June 28 meeting, Wise said the U.S. Census Bureau had recently released its latest population estimates for political subdivisions. Wise said since the 2010 census when Hebron’s population was 2,336, the annual estimates have steadily increased. The latest estimate as of July 1, 2016, is 2,402 residents, up from the 2,384 estimate in 2015.

Wise reported July 28 that the latest estimate for the North High Street sidewalk project is $796,000. The village is responsible for 20 percent of the cost plus any right-of-way acquisition and appraisal costs. The project is expected to go out for bid in 2019.

He added that the Hopewell Cottages dedication had been pushed back to 10:30 a.m. on Wednesday, August 23, to accommodate Congressman Pat Tiberi’s schedule.