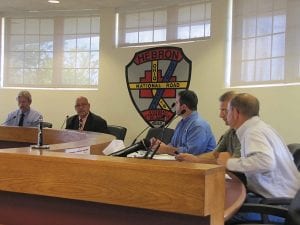 Wise outlined the rainfall data. The village’s wastewater treatment plant has measured four straight months – May through August – with at least seven inches of rain. Until this year, the village has never recorded more than one consecutive month with seven inches of rain. Rainfall in the village for the first eight months has exceeded the total amount of rain recorded in 2013, 2012, 2010 and 2009. Eight times in the last six months, rainfall events have exceeded 1.5 inches and four of the eight were over two inches. 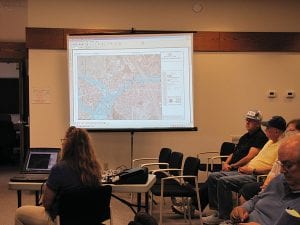 “This village was created in the low spot intentionally,” Newton explained. Water from area farms was specifically channeled to Hebron to supply the Ohio-Erie Canal. “What if some of that water is diverted?” Newton asked. “Is it possible to divert it north?”

“There is a lot of history here because of the canal that is working against us,” Coghlan said. “There is definitely some work to be done. There will always be some floodplains here. We’re looking at ways to minimize the impacts.”

Coghlan noted that most of the drainage culverts in the village have been redone though several still need to be replaced. “There is a lot of water to deal with and manage,” he explained. His firm, Bird+Bull Engineers, has served as the village’s engineer for decades. “We’re going to try to improve FEMA’s flood maps,” Coghlan said. “We’re going to put in a lot of information. We will generate a number of different models.” He emphasized the importance of local data from residents to help calibrate the models.

“We want to identify the magnitude of f looding, then identify remedies,” Coghlan explained. “We’re looking for solutions, answers.”

Some of those answers may be downstream of Hebron such as removing obstructions on the South Fork of the Licking River that might be backing up storm water into Hebron. Mason wants the study to take a close look at the impact on Hebron after ODNR created a wider channel for the South Fork from Buckeye Lake’s Seller’s Point spillway outlet to just outside Hebron.

Wednesday night, council members unanimously approved a proposal from Bird+Bull to produce a stormwater study at a not to exceed cost of $20,000.