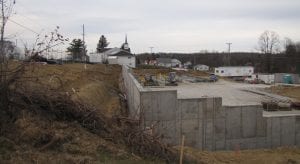 In his report, Zoning Inspector Forrest Cooperrider turned in t permits. Three are for new homes and the other is for a room addition.

Trustees also discussed the construction status for the Licking Township Fire Company’s new seven-bay station. The massive retaining wall is complete and the floor has been poured for the living quarters portion of the building. Trustees also approved the second draw request from Robertson Construction for $139,684.