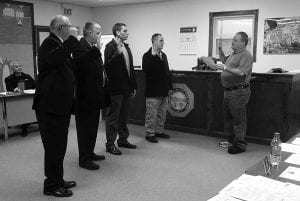 MILLERSPORT – The list of distressed properties being considered for demolition under the Moving Ohio Forward program has dropped from 10 to three.

• 12280 Lancaster Street: This former Sohio station and apartment building has already been condemned. Mayor’s Assistant Vince Popo said it should be down by June 1. With back taxes totaling about $45,000 and additional lien of about $5,000 for demolition costs, it will likely become village property.

• 2687 Summit Street: This property has not yet been condemned which is a program requirement. The next step is to get the county health department out to condemn it. Popo said about $16,000 is owed in back taxes; and

• 12115 Fifth Avenue: An open cistern on the property is a safety hazard. Taxes are current. Popo is working with the owner to get her permission to have it torn down.

Popo said the village must pay the demolition costs and then will be reimbursed by the program. So the plan is to tear one down at a time, get reimbursed, do another and so on.

In other business Tuesday night, council members unanimously approved an amendment to the village’s contract with Walnut Township for fire/EMS services. The four-year contract beginning Jan. 1, 2011, is now a continuing contract with no set expiration date. Walnut Township Trustees approved the amendment by a 2-1 vote, with Trustee Sonny Dupler voting “no,” at their March 5 meeting.

Millersport Fire Chief Matt Bergum requested the change to make it easier to finance a new $500,000 fire truck. Millersport’s fire department’s budget can afford $50,000 a year payments for 10 years, but financial institutions were concerned about the expiration of the township contract at the end of 2014. The bank and the county auditor’s office suggested asking voters to approve a bond levy to pay for the new truck.

“It is insane to ask for money you don’t need,” Bergum told trustees March 5. He emphasized that he isn’t asking for any contract changes other than demonstrating the intent of the township to continue to work with the fire department. Without being able to show intent beyond 2014, Millersport would be forced to seek a bond levy that it doesn’t need, Bergum explained.

With the amendment approved, the new fire truck will be financed by First Capital on a 10-year lease purchase with annual payments of $51,375. The interest rate is 3.47 percent. Bremen Bank wanted a 10 percent down payment and was seeking a higher interest rate, Bergum said. The new truck should be delivered in October.

Street Commissioner Gilbert Arnold reported that he met with Spires Paving to look at problem areas. He expects to have an estimate for the April council meeting on needed repairs. Arnold wants to start with Park, Terrace and Deep Cut. Some bad areas on Canal and Chautaqua also need to be addressed.

Council members also approved resolutions setting fees for the village-owned docks in the canal; making a portion of Cherry Alley one-way; and establishing rates and hours of operation for the pool. They heard the first reading of an ordinance changing the monthly meeting date for the Board of Public Affairs to the third Tuesday of each month at 7 p.m.

Dock fees will be the same as last year – $300 for the April- November season for Village of Millersport residents and $400 for non-residents if any docks are not rented by residents. Vehicles traveling eastbound on Cherry Avenue had difficulty safely turning onto Lancaster Street. Traffic will now be one-way East to West on Cherry Alley.

The pool will be open from June 1 through August 18. Hours of operation will be from noon to 7 p.m. Monday through Saturday. Sunday hours will be 1 – 5 p.m. Family memberships for the season are $150 when purchased by April 30; $175 when purchased May 1 – May 31; and $200 when purchased June 1 or later. Monthly family memberships are $75 each for June and July. Individual monthly memberships are $35 for June and $25 for July. Season memberships for senior citizens with Golden Buckeye cards are $60. Adult (15+) individual season memberships are $80. Daily rates are: Senior with Golden Buckeye Card – $2; Adults (15+) – $3; Children (3 – 14) – $2; and Children (under 3) – Free. The village is seeking qualified applicants for lifeguards at $7.30 per hour. Please inquire at the village office.