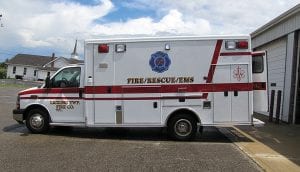 Licking Township Fire Company’s new medic went into service late last week. It replaces the medic that was totalled this winter when it was struck in the rear by a semi on I-70. The loss was completely covered by insurance. Beacon photo by Charles Prince.

Wilson is the company’s only full-time employee. He and a paid part-time EMT/firefighter are on duty from 8 a.m. to 4 p.m. on weekdays. From 4 p.m. to 10 p.m., the company totally relies on volunteers. Even though the company has about 30 active volunteers, members are getting older and recent economic pressures are forcing some volunteers to work a second or even a third job, Wilson explained.

Wilson prefaced his request Monday night that he is not normally a fan of one-man duty shifts, but believes that one person can improve patient care.

“He can establish initial care,” Wilson said. One EMT can’t transport, but care can start while waiting for a volunteer to arrive.

Wilson estimates the cost at $19,000 to $22,000 a year depending on how many shifts are filled by more costly paramedics and EMT-Intermediates. Licking Township pays paramedics $13 per hour and intermediates $12 per hour provided both have FireFighter II cards as well. An EMT-Basic earns $11 per hour.

Wilson told trustees he doesn’t anticipate having to break into the company’s reserves to pay for additional six hours per day. “It is a start in giving us more coverage,” he said. “I can’ guaranteed it would be a paramedic every day.”

Wilson wants to continue to hire their part-timers from the company’s membership ranks. That makes managing federal wage and hour regulations time consuming, but “Quality care to the citizens is what it is all about,” he emphasized. The company does not bill for EMS transports and has no plans to do so.

Trustees will discuss Wilson’s proposal at a future meeting.

Wilson reported that the company made 95 runs in April – 73 EMS and 12 Fire. Year-to-date runs through April total 326.

Trustees unanimously approved his request that the township reimburse Brice Maple the $6,313 in tuition that he spent for paramedic training. Maple had only been with the company a short time before he decided to go to paramedic school. Wilson wanted evaluate his commitment before agreeing to pay for medic school.

In other business, Monday night, trustees agreed that there is no reason to request a hearing on a change in ownership of the liquor license at the Shell station on Ohio 13.

An information pack about township regulations for its cemeteries has been developed. It will be distributed to about 10 area funeral directors. It includes a request that funeral processions use the south entrance to Jacksontown Cemetery for safety reasons. Trustees are still planing to review regulations and charges in detail later this year.