Fire Chief: “Don’t call the firehouse if you need our services”

MILLERSPORT – “Don’t call the firehouse if you need our services!” Millersport Fire Chief Rob Price instructed at Village Council’s May 14 meeting. “Call 9-1-1 no matter what!”

Price explained that some recent calls to the firehouse delayed their response since emergency calls must be routed through the sheriff’s office’s Communications Bureau. He added that local 9-1-1 calls made on cell phones first go to the Licking County 9-1-1 Center which has a direct link to Fairfield County. Price said the Millersport Firefighters Association recently donated a 52-inch television screen for the Communications Bureau so dispatchers can quickly see what units are already in service.

After months of being tabled, council members unanimously approved an ordinance annexing into the village 19.2 acres of property owned by the Ricketts Family Fairfield Holdings, LTD. The tract has frontage on Ohio 204 and Jason Avenue.

Richard Waugh of ADR & Associates announced that the village’s first ever subdivision regulations have been completed. He and zoning inspector Bill Simpson have also completed a new zoning map. Both will be presented at the May 28, council meeting. Work has just started on updating the village’s zoning regulations. “That will be tougher than the subdivision regulations,” Waugh told council members. The zoning regulations date back to the 1990’s and are contradictory in places.

He also said this summer’s repaving of Canal and Chautauqua will probably start after the Sweet Corn Festival. The work is part of the $450,000 Neighborhood Revitalization grant the village was awarded earlier this year. The grant will also fund extending the sidewalk from Deep Cut Road past the village complex to the apartments plus stormwater upgrades on the sidewalk route, and on Canal and Chautauqua. Last month, council members unanimously renewed ADR’s $1,200 a month retainer for another year, asking the firm to focus on finding funding for street repaving.

Mayor Gary Matheny said Street Supervisor Gilbert Arnold and his crew have finished installing the playground equipment on the former tennis court. The equipment was donated by the City of Lancaster with Millersport responsible for removing it from a Lancaster playground. “The playground looks great,” Matheny told Gilbert. “Thank you.” But he emphasized the new equipment is not yet open since the tennis court surface still needs to be removed and replaced with rubber playground mulch. He hopes it will be ready by the end of the month.

Last month, Simpson, who volunteered to head up the village’s spec house project on Broad Street, reported it turned a $5,708.59 profit. The two-story new build with four bedrooms attracted a Millersport native to return home with his wife and two children. The primary object was to encourage others by example to build homes for families on vacant lots or spur the demolition of dilapidated homes to clear lots for new development. Matheny and Popo, who came up with the plan, wanted to do something to address Millersport’s aging population, declining school enrollment at Walnut Township Schools and the increasing proportion of rental housing to owner-occupied homes. 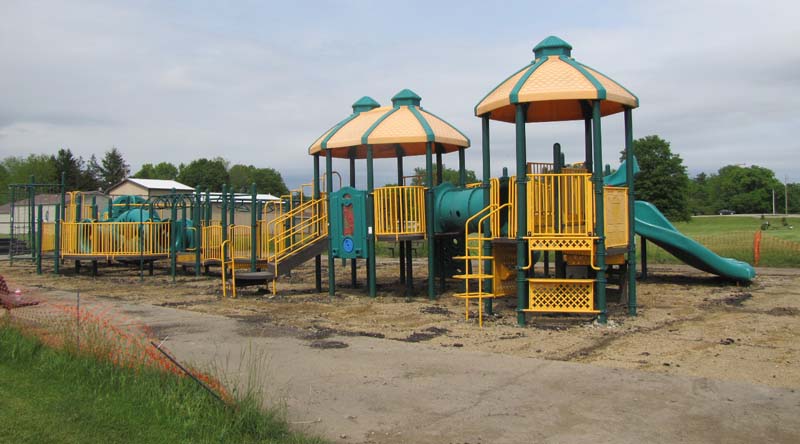 Playground equipment donated by the City of Lancaster has now been reinstalled on the former tennis courts. The area will open once the asphalt surface has been removed and replaced with rubber playground mulch. Beacon photos by Charles Prince. 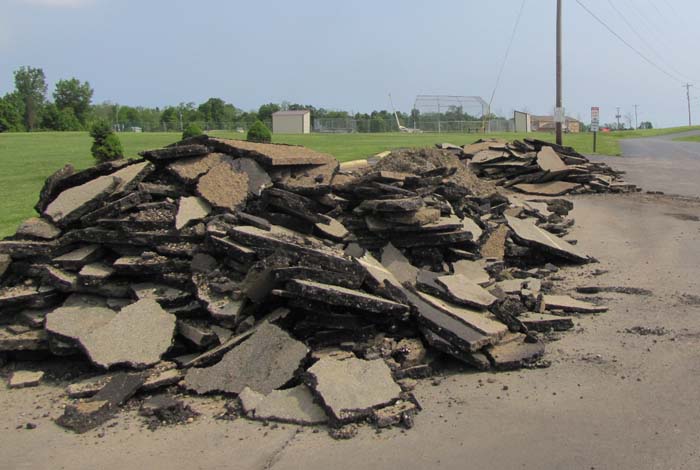 The asphalt tennis court surface has been removed from around the village’s new playground equipment. The new play area will be opened once playground rubber mulch is placed around the equipment.