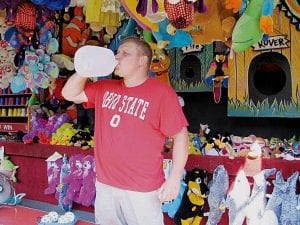 
LANCASTER- Jim Sheets had the Fairfield
County Fair’s coolest, most popular booth Monday–he sells air conditioners. Sheets,
representing Lancaster’s RN Smith Heating and Air, had a demonstrator air
conditioning unit blowing cold air inside his tent at full throttle, and it was
only 10:30 in the morning.

“I
had ’em packed in here yesterday,” he said. “I’m nice and cool in here. And, if it gets cold, this a heat pump. I just flip a switch for some heat.”

His
hand was nowhere near the heat switch Monday as the temperatures soared to a sweltering 90 degrees, with plenty of humidity thrown in. Fairgoers stopped by his tent for some relief. 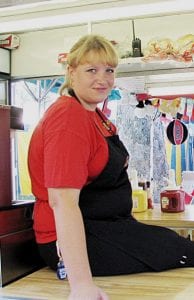 Sasha Skryabina has a hot day ahead

Excessive heat is a very unusual problem for the fair, which usually enjoys high temperatures nearly 30 degrees cooler. But, there was still a strong turnout Monday, even though the weather man promised the heat would subside in the days ahead.

Business boomed for Heather Acuff, who happily sat among a roomfull of freezers at Andee’s Island Oasis; the booth serves smoothies and frozen drinks. “We’ve definitely been selling a lot of drinks and stuff,” she said.

“So
far, today we’re doing okay,” said Kim Featheroff, just before her fan quit. Featheroff is a registered nurse based at the Fairfield Medical Center who was working the fair’s first aid station. Fortunately, she had an extra fan.

Featheroff
said no one came to her office complaining of heat stroke symptoms that morning, but the day before, also a scorcher, was a different story. “This isn’t the kind of weather we want for the fair,” she said. 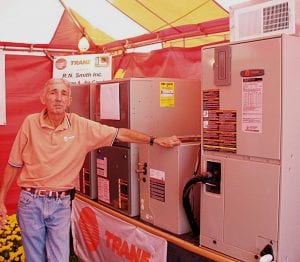 Jim Sheets’ tent is the coolest!

Featheroff said people forget that fair food is loaded with salt. Fair food and pounding sun can make for lots of light heads if fairgoers don’t drink enough fluids. Chug water and stay in the shade whenever possible, she advised. Unfortunately, none of the fair’s buildings (except for Sheets’ tent) is air conditioned since the event usually has far cooler weather.

But the heat wasn’t much of a problem for Cindy Hutchins or her goat, which Hutchins was being bathing and grooming with nice cool water before a livestock show. Hutchins said the livestock barns were stocked with fans and well ventilated. “We’re not having trouble,” she said.

There
were no fans or air conditioners in Sasha Skryabina’s “Bodacious Burgers”
booth–just open fryers and burners blasting even more heat into the air. When
asked how she was doing, she simply replied, in a thick Scandinavian accent,
“It’s hot.” 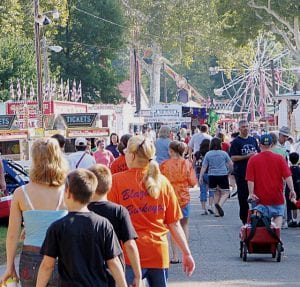 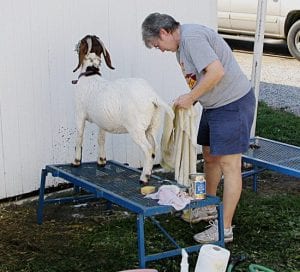 Cindy Hutchins won’t let the heat get her goat!