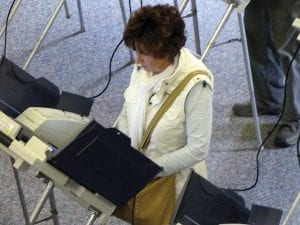 Incumbent Dale Factor trailed with 330 votes and will not be returning for another term.

“I thank the voters of Thorn Township for electing me,” said Lyle, who looks forward to “re-evaluating everything” with the township. He said as trustee he’ll strive to find new ways to operate within the budget and he plans to improve communications between the tow nship gover n ment and community. He plans to begin a “basic overhaul” of township operations.

Two posit ion s remai n of four that were open on Thornville Village Council. Incumbents Dale Brussee and Heidi Badders will each return for another term, with Brussee receiving 119 votes and Badders 123. Incumbents Lynn Snider and Cathy Boykin did not seek another term, and no candidates vied for their positions. Village Administrator Beth Patrick said after Jan. 1, 2014, remaining council members have 30 days to fill the two council positions or Mayor Gavin Renner will appoint two new members. Anyone interested in applying for one of the two open the council positions should contact the village office.

Thornville voters approved a liquor option for the Circle K gas station/convenience store by a 142 – 86 vote, and a Sunday liquor option 132 to 96 tally.

For the Northern Local School Board, challenger Kimberly Severance garnered the most votes with 1,360, followed by incumbents Daniel Snider with 1,275 votes, Patrick Hogan with 1,251, and Richard France with 1,007.

Overall in Perry County, 28.13 percent of registered voters cast a vote in the Nov. 5 election.