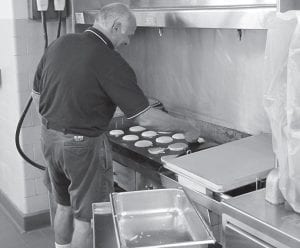 Vince Popo handles the pancakes as school board members serve breakfast to staff members on their first day back from summer vacation. Beacon photo by Charles Prince.

MILLERSPORT – Concerns that Walnut Township students will no longer be able to do it all dominated last Thursday morning’s board of education meeting.

Parent Karen Keller detailed how the district’s small size and efforts to maintain a wide range of extracurricular activities mean some students are active in several sports as well as band and music programs. For example, several football players are members of the marching band.

Keller mentioned one specific incident – scheduling the fall sports photo day during band camp – as possible evidence that the past accommodation for band members playing athletics is coming to an end. She told Pohlman about the conflict in June, but didn’t hear back from him until last week. “We’re not being heard,” Keller said.

She’s also concerned about comments about the need for “dedicated” athletes, believing it’s a jab at band member athletes. “It should be up to students and parents to decide how many activities they are involved in,” Keller said. “Show respect to both. I like that my kid can be in the band and play a sport.”

Superintendent Ron Thornton responded to Keller’s lengthy comments. “You need to do one of two things – run for the board or when the position opens apply to be athletic director. Get involved at a different level.”

“I want the board to understand the impact of things being said to athletes,” Keller added.

Parent Lisa Keyes shared some of Keller’s concerns. “My fear is that those who decide on the schedule at our school many not try to accommodate as many as possible due to personal feelings.” She also questioned the inference that her daughter isn’t ‘dedicated’ when she leaves a sports practice to go to band practice. Keyes said band has 28 students, grades 7-12, which is the largest group at school.

“I hope there are meetings where we try to defuse things,” Thornton said.

Several parents defended Pohlman, noting his impact on their children. Booster President Gary Allison said photo day was moved last year, causing them to lose out on a basketball program. He urged Keller to get the full picture.

“We are trying to get the full picture,” Keller responded. “But we have to communicate. This year we had band camp and mandatory practices (the same week).”

“If a conflict can be avoided next year, it will be,” Thornton concluded. He suggested moving on to something more position – the boosters turning over the new field house and concession stand to the district. Allison recognized Rob Wiseman as the project manager, noting the long hours that he and other volunteers invested in the new facility. The multi-use facility at the football field was primarily built with donations of labor and materials. No district funds were used. Board members and Thornton thanked the boosters for their efforts.

In other business, district treasurer Kirk Grandy had some potentially sobering news. He said income tax revenues were $53,000 less than anticipated for the July quarterly payment. “We’re going to have to watch it closely,” he told board members. Grandy said a contact at the Ohio Department of Taxation believes the quarterly shortfall will show up in the October receipts.

Maintenance/transportation supervisor Mike Washburn said work orders are now being written and will be tracked in an Outlook program. “We’ve put a lot of money in our buildings over the past two years,” Thornton explained. “Now we have to maintain them.”

Washburn is also creating a preventive maintenance plan that will include critical telephone numbers, a month-by-month maintenance schedule and prevention maintenance steps for major pieces of equipment.

Board members also approved two supplemental contracts for Mary Ford – one to serve as the Progress Book coordinator for the elementary school and the other as lead elementary teacher. The lead teacher post is a new one. It’s needed, Thornton explained, because elementary principal Angie Harrison will have to spend some time at the county office due to her new responsibility as curriculum coordinator. Part of her salary will now be paid by the county. Ford will have first responsibility for the elementary school when Harrison is out of the building.

Patricia Thomas was rehired as a Kindergarten teacher after she retired at the end of the school. She received a one year contract at zero years of experience at the base salary for a teacher with a Bachelor’s Degree. “It is a year at a time,” Thornton added.

The board returns to its regular meeting schedule next month with a meeting at 7 p.m. on Monday, Sept. 13 in the elementary school library.