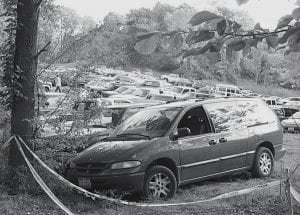 AVONDALE- An annual Buckeye Lake event kept the excitement where it belongs – inside its venue.

A couple of acres of mowed grass appeared to do wonders for parking at the popular annual QFM96 Breakfast Club event Friday morning at Capt. Woody’s; the event has struggled with adequate parking in the past, raising neighbors’ ire. For the most part, Avondale Road, typically lined with parked cars during the event, was free of parked cars.

Hundreds of Breakfast Club patrons parked in a mowed field near Capt. Woody’s or in paid parking areas. Some fans parked in The Woods subdivision, near Avondale Road. Many more people were in boats on the lake.

“It was non-eventful,” from a law enforcement perspective, said Licking County Sheriff Captain Tom Lee. He said there were no arrests. The only incident involved a man who was found passed out near the road a short distance from Capt. Woody’s. Lee said the man was taken home and no charges were pressed. 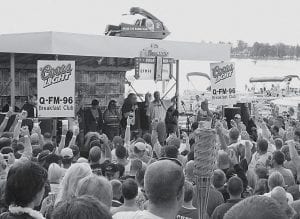 Hundreds of Rock & Roll fans flocked to Capt. Woody’s by foot, car, and boat early morning Aug. 31 for the annual QFM96 Breakfast Club. While the crowd enjoyed the event’s usual zaniness, Capt. Tom Lee of the Licking County Sheriff’s Officesaid there were no arrests and the crowd was well-behaved. Beacon photo by Scott Rawdon.

The sheriff’s department had eight to 10 officers patrolling the area around Capt. Woody’s between 4 a.m. and 2 p.m. Friday. When asked if the extra parking helped the situation, Lee answered, “It didn’t hurt.”

“It looks good to me. That parking really helped,” said
Capt. Woody’s landlord Mike Hostasa. A shuttle bus wasn’t necessary
since the new parking area was so close to the venue.

Avondale Road residents and residents of The Woods subdivision near Capt. Woody’s have complained that the venue generates parked vehicles, noise, and trespassers who disturb those living nearby – not just for the Breakfast Club event, but most weekends as well. Hostasa reminded people that there are also other places on Avondale Road that generate traffic and parked cars. People need to understand (particularly new residents), he said, that when you live near a recreation area with clubs, there’s going to be some noise–it just goes with the territory. “Don’t move out here of you don’t want to party,” he said. “If you don’t like it, don’t come out.”

Hostasa said patrons need always to keep their alcohol consumption in check. “Can’t you have some sense and quit?” he said. “Have a good time, but don’t destroy things.”

Bill Ours, owner of Ours Towing in Hebron, said Tuesday that no one was towed from the Breakfast Club event.

“A lot of people obviously took advantage of the extra parking,” said Daddy Wags, QFM96 morning disk jockey and a host of the Breakfast Club. “We want to be good neighbors.” Although Avondale Road is a public street, Wags said the radio station is sensitive to parking issues and maintaining positive relations with the people who live around any QFM96 event. He was happy to see people weren’t parking on Avondale. Wags said the radio station deals with similar parking issues in places like Columbus’ German Village, where people live near QFM96 sponsored events.

Wags doesn’t like to compare one Breakfast Club location to another, but he did say that the Buckeye Lake crowd is particularly energetic. People arrive at Capt. Woody’s an hour before he does – the Breakfast Club starts at 6 a.m. – and stay hours after he leaves. “We had a great time; it’s really an enthusiastic crowd. We’re trying to keep the peace with the people up on the hill,” said Wags.

It’s important for Columbus personalities, he said, to
remember that people in rural areas are big fans and, of course, patronize the
advertisers just like anyone who lives in Columbus. Wags and co-host Jerry
Elliott have recently hosted events in New Lexington and Circleville. “There are
lots of people in the rural areas who are anxious for some fun,” he said.