Enjoy church services in your car 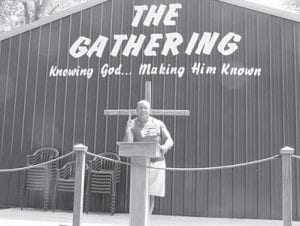 Tom Gill preaches from the deck of The Gathering in FairfieldBeach. Beacon photo by Scott Rawdon.

FAIRFIELD BEACH- High tide or low tide, Tom Gill is on God’s side. Gill, pastor of The Gathering, a non-denominational church in FairfieldBeach, wants to take away all the excuses people give for not going to church, and make visiting The Gathering as easy as a day at the beach. To that end, he’s brought back his “drive in” services, which began May 20.

“Last year, there wasn’t a single rain-out day,” said Gill. “It’s a miracle.” Simply put, anyone can drive to The Gathering facility summer Sunday mornings at 8:30 a.m., tune his or her car stereo to stations 90.9 or 88.9 FM and listen to Gill’s service from the comfort of one’s vehicle. Or, said Gill, anyone can pull up a lawn chair and listen to Gill present the sermon from a pulpit on the Gathering’s deck.

Preaching outside has special meaning for Gill. “The building’s not the church; it’s the people,” he said. “I’m an outdoors kind of guy, anyway. Last Sunday, I preached in sandals.” He said he got the idea from preaching at a church in Florida with a unique outdoor sermon area. In the middle of a large field, said Gill, was a large boat on dry land, and the sermon was delivered from the bow to those surrounding the boat.

Back in FairfieldBeach, Gill said everyone needs to be on The Gathering’s property to hear the service–the stereo signal won’t carry past his land and the speakers broadcasting his sermon are only loud enough to reach the people in lawn chairs. Some of his neighbors can hear his sermon, he said, but they seem to enjoy it. Certainly, Gill does. “It’s one of my favorite things. I just love it,” he said. “God allows me to do the Sunday morning thing. It’s just a blast.”

Gill, a self-proclaimed “Beach Boy” type, believes he was destined to finda home at a place called Fairfield Beach. “Last Sunday, I preached in sandals,” he said. His goal is not only to offer a place to worship for the residents of the lake, but all visitors as well. People gravitate toward the water, and Gill would like them to gravitate toward the Gathering.

Part of Gill’s message is that our individual prayers and needs can change with the tide, but the Word of God is constant. “If people are open to God, they’ll grow with him,” he said. To put it in beach terms, “We can learn from the high tide and from the low tide. Are you willing to learn from these and not get your boat stuck?”