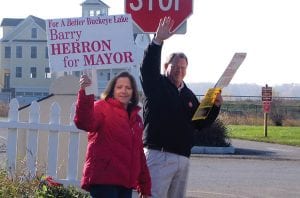 “I’d like to thank my wife, Karen, first of all,” said Factor, as well as everyone who supported him. There will be a recount between Factor and McCauley and provisional ballots are yet to be counted, but Factor said he feels pretty comfortable with his lead. As far as the major issues he believes he faces during his term, “Fire and EMS, always,” he said. “Zoning’s always an issue.”

“I’d like to get rid of the gravel roads if we can,” said Wilson, who said that finishing a new fire station and adding full-time staff to it top the list of important township issues for the next four years.

Thornville voters approved a .05 mills parks and recreation levy 223 vote for it to 131 against. Patrick said the revenue would go toward park maintenance and purchasing new equipment.

Richard France, Northern Local School District’s sole incumbent seeking re-election, retained his place on the board with 1322 votes. Candidates Daniel Snider, with 2156 votes, and Patrick Hogan, with 1796, will join France on the board. Candidates Shawn Wharton, with 1298 votes, Charles Montgomery, with 754 votes, and Brian W. Luft II with 401 votes, did not earn seats.

In other Perry County races: