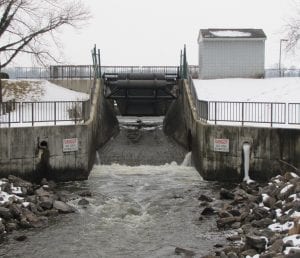 What’s wrong with this photo? It’s March 4 and the gate on the regulatory spillway in Buckeye Lake Village is still open. Tuesday’s heavy rain is rushing away, leaving the lake three-feet below full pool. Beacon photo by Charles Prince.

BUCKEYE LAKE – The breach has occurred. No, nothing has happened to the Buckeye Lake Dam.

What’s been breached is the Ohio Department of Natural Resources’ pledge last August to work with the community “in an open and transparent process.” ODNR Director James Zehringer made that pledge in an August 13, 2014, letter to Buckeye Lake Dam stakeholders.

We gave him the benefit of the doubt when he announced in the letter that ODNR had entered into an agreement some four months earlier with the U.S. Army Corps of Engineers to assess the dam’s current condition. Zehringer pledged, “We will make time to seek residents’ input and work through these issues with the community in an open and transparent process before any final decision are made.” Earlier in his letter and in bold type, he wrote, “The final assessment report will be completed by early 2015 and will be made available to the public for review and comment.”

ODNR did hold three open house format meetings last fall, providing very general information about the assessment and some of the issues involved. No plans or even possible plans were offered so there was nothing specific for residents’ to address or even question.

Fast forward to March 1. A long-time Buckeye Lake resident noticed that the gate on the regulatory spillway in the Village of Buckeye Lake was still open. For years, the spillway gate has been closed on March 1 to begin the annual re-fill to reach “full pool” for the lake’s recreational season. Buckeye Lake’s watershed or the area that drains into it is very small. So reaching “full pool” overwhelmingly depends on spring rainfall and is generally reached sometime in the last two weeks of April.

Our sharp-eyed resident then asked why the gate is still open. He eventually pried out an answer – the gate will stay open until the Corps of Engineers report is received and evaluated by ODNR. A lake advocate was able to get an official confirmation with some resistance Tuesday. A Beacon inquiry Tuesday morning brought the off icial response Wednesday morning which is reprinted below.

“ODNR very soon will be issued the U.S. Army Corps of Engineers’ report of its review of the condition of Buckeye Lake Dam. The report will include a review of past engineering reports and existing conditions at Buckeye Lake Dam and recommendations for risk reduction measures, operation and maintenance at the dam. This is what we covered last fall with our Open House public meetings in Millersport, Buckeye Lake and Hebron.

Out of concern for public safety, ODNR is currently keeping the lake at its present winter pool elevation until the final Corps report is issued to ODNR and reviewed by ODNR. We will make the Corps report available to the public after it is issued. We expect this to take place within the next week.

ODNR will then review the findings and recommendations, and make and announce a decision on our next steps. We expect this to take place within the next three weeks. Throughout all of this, we will present current information to the public and continue to respond to their questions and concerns.

As we said publicly in 2014 through our Open House public meetings and other discussions and information materials, many are aware that there are deficiencies in this dam, that the dam is aging and deteriorating, and that dam improvements are needed to safeguard the public. Updates can be found on our Div. of Engineering web site at engineering.ohiodnr.gov under Dam Risk Reduction Program – Current Projects.

We k now you and others in the lake community are anxious about this; we are eager to share the Corps’ findings and recommendations as soon as possible.”

On first read, ODNR’s statement sounds reasonable. We wouldn’t be writing this if it had been issued voluntarily in January or early February. The fact that it was issued after the decision to keep the gate open was made and in response to a growing number of inquiries speaks much louder than the actual words. ODNR failed the first real test of Zehringer’s pledge to “make time to seek residents’ input and work through these issues with the community in an open and transparent process before any final decisions are made.”

Maintaining the lake’s threefoot winter draw-down longer – days, weeks or months – is a very significant issue. It has a very significant economic impact. Hundreds of jobs depend on the lake’s recreational season. Dozens of businesses are stretched near the breaking point every winter. A delay in the opening of the recreational season or even just uncertainty about when it will open can be catastrophic. Pending boat and home sales can be cancelled. Vacation plans can be changed. IT IS A VERY BIG DEAL to the thousands who depend on the recreation season for their livelihood and/or property values.

Fear is a key motivator and ODNR’s statement invokes a ’concern for public safety.’ Mentioning ‘public safety’ is an attempt to end discussion. ODNR claims that they are waiting like everyone else to read the report. If that’s true, what’s creating their concern for ’public safety.’ We haven’t heard anything about newly discovered seeps, sink holes or other problems with the dam.

Here’s our theory. I sincerely hope ODNR will prove me wrong! I will gladly eat crow. First, we need to review some history.

ODNR has been trying to fix the dam for more than 20 years. Twenty years ago in 1995, the Save the Lake Committee lead by the late John Sproat turned back an ODNR plan to remove all the trees on the dam. The committee sought expert assistance from an urban forestry professor at OSU. He inspected every tree on the dam concluding that trees are armoring the dam, roots grow only grow 18 inches into the soil and that windthrown trees are not a threat to the stability of the dam. The trees were saved and only dying or damaged trees have been removed.

A few years later ODNR Chief Engineer Steve Manilla took on the dam repair challenge. His plan to build a 20-some foot wide new dam in front of the current embankment ran into a buzz saw of opposition from residents and concerns about cost. ODNR knows that residents are very protective of their lake.

We’ve heard rumors that somebody big is tired of the delays and wants the dam fixed, whatever that means. ODNR’s agreement with the Corps of Engineers seemed a bit curious to us. Perhaps it was ODNR’s effort to use an appeal to authority to end the debate on how to upgrade the dam. After all, who knows more about dams than the Corps of Engineers. You probably would get a dissent from New Orleans residents after their Katrina experience, but that’s another story.

After a brief flurry of public involvement with the three open house meetings last Fall, it’s been very quiet on the dam-front.

It’s been decided that this time something is going to be done. First, residents can’t challenge the authority of the Corps of Engineers is the thinking. But just in case, ODNR will make it very painful to have a meaningful discussion about the proposed plan and all its features such as who pays to remove existing boat docks, what dock designs will be permitted on the “fixed” dam and what use restrictions will be enforced on the state-owned portion of the dam.

Keeping that gate open is a very effective way to limit comment and consideration of alternatives. ODNR is in effect saying to residents, “We’ll be happy to discuss your concerns, but every day you spend doing that costs you a day of the recreational season.” The pressure to accept whatever the Corps and ODNR have cooked up will be intense by May. Then, depending on whether we have a wet or relatively dry May to mid- June, we will find out whether we have a recreational season or not.

Closing the gate now is no more risky this year than years past. If it turns out that the Corps assessment contains a bombshell, the lake level can be drawn down in a few weeks. The damage from a dam breach has been exaggerated for years. We’ve often heard (not from ODNR) that if the dam should break, there would be a foot of water on the courthouse steps in downtown Newark.

That’s ridiculous. Buckeye Lake has about 2,850 acres of water with an average depth of five feet or 14,250 acre-feet of water. In other words, if the entire lake was drained, it would cover 14,250 acres with one foot of water. That’s an area approximately three miles wide by seven miles long. First, not all the water would drain out since it would pool in the areas where the depth is below the dam’s base. Second, there are few obstacles or topography that would force the water to pool in that three mile by seven mile area. It would continue to spread out.

Dan Bolger addresses this issue with more authority in a March 4 letter to Wisse. He wrote, “I am submitting this recommendation based on my 16 years experience as Emergency Management Director for Fairfield County, a 12 year homeowner on Buckeye Lake, a Director of the South Licking Watershed Conservancy District, a boater and fisherman, and as a career engineer. Since 1987, I was directly involved with the response and recovery to various flooding incidents in the area before and after the construction of the emergency spillway.

It is important to close the gates and bring the lake up to full pool by the end of April for the economic benefit to the community and to provide for the recreation value to the residents and park visitors. I sincerely do not believe there is a flooding danger based on the existence of the emergency spillway and the major improvements recently gained by drainage improvements that increased the outlet channel capacity.

The 2015 recreational season on Buckeye Lake is at real risk, threatening hundreds of jobs, dozens of businesses and property values around the entire lake. In addition, toxic algae is more likely to thrive in a drawn-down, mostly stagnant lake during the summer. Depending on the fix-it plan details, the ambiance of the North and West banks could be destroyed along with the lifestyles of its residents.

What can you do? First, don’t expect someone else to write the letters, make the calls and attend the meetings. Get personally involved! Numbers will make a difference. Tell Director Zehringer to keep his commitment to “make time to seek residents’ input and work through these issues with the community in an open and transparent process before any final decisions are made.” Send emails to James.Zehringer@dnr.state.oh.us or John.Wisse@dnr.state.oh.us, letters to Zehringer at 2045 Morse Rd., Columbus OH 43229-6693 or calls to Zehringer at 614-265-6565.

One community activist suggested setting up an escrow fund for dock owners to deposit their annual fees. The impact of a lost recreation season will affect our community for years. It’s time to get involved to save our lake season!