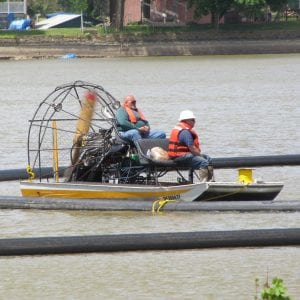 BUCKEYE LAKE- Dredging should resume within the next few days, said ODNR Division of Engineering spokesman John Wisse. He said dredging channels in Buckeye Lake stalled when the disposal/dewatering site on Lieb’s Island was filled.

“They had stopped dredging about two weeks ago,” Wisse said.

A new site along the Feeder Canal next to the Village of Millersport Wastewater Treatment Plant is nearly ready. The discharge channel for the water run-off was being lined with stone on Wednesday. The dredge discharge pipe was pulled up the nearly dry Feeder Creek and into the containment basin on Wednesday as well.

The extremely low water levels are complicating dredging operations. ODNR was using an airboat as a tugboat Wednesday to move around the discharge pipe and to position a work barge near the dredge that is just off the Maple Street park on Lieb’s Island. This dredge is creating a channel from the Lieb’s Island boat ramps to Seller’s Point to provide access to deeper water. 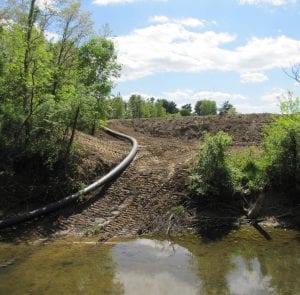 Wisse said another dredge will be creating smaller channels to the lake’s islands for emergency service access and channels are will be dug to the marinas.

Previously, ODNR Deputy Director Gary Obermiller said dredge disposal areas “are a problem for us.” Obermiller said two state dredges are running and bids might be sought to put a privately owned dredge to work. A third dredge that has been assigned to Buckeye Lake for years is stuck in the now almost dry basin behind the state park office. 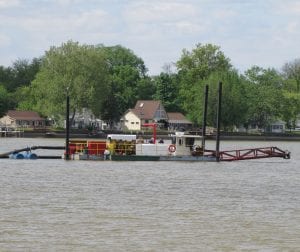 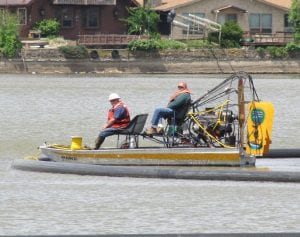 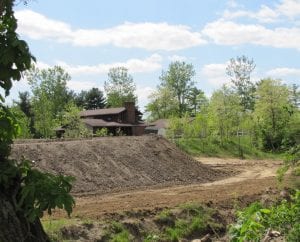 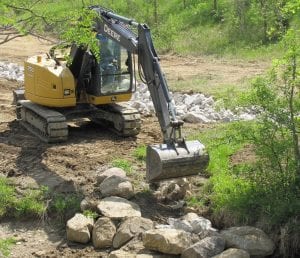