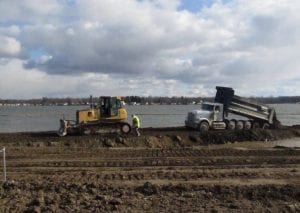 A dozer pulls out a dump truck that got stuck dumping bank run into Buckeye Lake to build the new causeway around the AMIL Spillway.

Don’t worry; it’s not water seeping through the dam. It’s information that’s finally seeping out about what comes next for Buckeye Lake. We’re hearing, both on and off record, increasing optimism that most of the dam work will be completed by late this year. One report says an official ceremony with Buckeye Lake’s favorite governor, John Kasich, present is being scheduled for sometime in November.

That’s great news for long suffering business owners, waterfront property owners and particularly dam-front homeowners. What’s not so promising are excerpts from an Eastern Governors University water quality study commissioned by Ohio EPA and the U.S. Fish and Wildlife Service. The excerpts are reportedly from a draft version of the report that has not been released to the public.

The report’s primary authors, all PhD’s at Eastern Governors, are Drs. Abheer Koothrappali, Amy Farrah-Fawcett and Leo Wolowitz. Koothrappali is an ichthyolgist; Farrah-Fawcett is a fishery biologist; and Wolowitz is a limnologist. 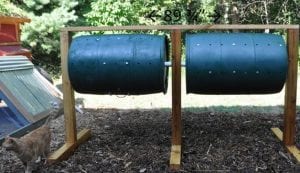 This is a much smaller, backyard version of the barrel composters likely to be used to compost dead carp. Courtesy photo.

The portions of the draft that The Beacon has reviewed are, not surprisingly, very technical. But once you slog through the technical jargon, charts and data points, one key point becomes very clear.

Since March 2015, Buckeye Lake has been a victim of an environmental assault unprecedented for such a shallow-water lake. The report reads like a criminal indictment, listing multiple counts. For example:

• Lower water levels – one to two feet lower per season – have lead to increased water temperature during the summer and increased ice pack during the winter;

• Lower water levels have also contributed to a wider range of water temperatures which has reduced the amount of dissolved oxygen in the lake water affecting everything that lives in the lake;

• Increased water temperatures during the summer combined with higher concentrations of phosphorus in the water column (same amount of phosphorus rich silt suspended in a smaller amount of water) has significantly increased the growth of toxic blue-green algae;

• Tens of thousands of fish have been literally flushed out of Buckeye Lake due to ODNR’s regular use of the underdrains at both spillways to reduce lake levels;

• Nearly 400,000 cubic yards of bank run has been dumped into the lake, filling in approximately 27 acres of the lake;

• This fill combined with the removal of some turnarounds and the subsequent reused fill material being placed in Crane Lake and back in Buckeye Lake for the construction of the causeway around the AMIL Spillway have added thousands of cubic yards of silt and have kept it moving in the lake. That additional silt has adversely impacted the survival rates of fish fry for species that lay eggs on the bottom of water bodies; and affected the growth of plant life necessary for the growth of most fish fry.

Dr. Koothrappali, the ichthyologist, concluded in layman’s terms that the lake’s fishery needs a “rest.” Dr. Farrah-Fawcett concurred. Their draft recommendation is to impose a two-year moratorium on fishing in Buckeye Lake to allow the fishery to build back to the levels in place before the dam replacement project began. The moratorium would be effective for calendar years 2019 and 2020. The moratorium could be lifted after one year if fish counts conducted by Ohio EPA show significant population increases over current levels.

Dr. Wolowitz, the limnologist or lake specialist, recommended that one species, Cyprinus carpio, or common carp be excluded from the moratorium. He wrote that the bottom-feeding carp contributes to the lake’s water quality degradation by releasing phosphorus-rich silt into the water column, increasing the growth of toxic blue-green algae. Drs. Kootrappali and Farrah-Fawcett concurred with his recommendation with one stipulation. Any carp caught in Buckeye Lake must be removed from the lake to help reduce the numbers of this fast growing species.

The exclusion of carp from the moratorium pleased ODNR Division of Parks and Watercraft officials. “We strongly support fishing at all state parks,” a spokesperson told The Beacon. The draft report also incorporates some discussion among Parks & Watercraft officials on how to dispose carp removed from the lake. “Very few fishermen are going to fillet it out and take it home with them,” one official commented.

At this point, the preferred disposal option is composting. Eight to 10 foot long aerated cylinders of steel or plastic would be installed around a horizontal axis, allowing the cylinder to be rotated with a hand crank. Dead carp and a catalyst like fine woody chips, grass clippings etc. would be loaded at one end of the cylinder which would be rotated each time more fish/catalyst was added to it. After 7-10 days, depending on the ambient temperature, finished compost, with some fish bones, would fall through the screens at the other end of the cylinder. The compost would be available free to anyone willing to haul it away.

The number of composters required is dependent on the level of interest in carp fishing. Initially composters would be installed at the North Shore (probably two or three), probably one every 1/4 mile along the new dam (16), Lieb’s Island boat ramps (2), Brooks Park (1) and Fairfield Beach Park (1).

Dr. Koothrappali claimed the smell would be more “woodsy” than “fishy.” “Neighbors won’t even notice it (after they have been in place for a few weeks),” he said.

Though the two-year fishing moratorium is just a draft recommendation at this point, The Beacon sought some local reaction. Buckeye Lake Mayor Peggy Wells said she was pleased the project will finally be done this year. “Our residents and visitors have put up with around-the clock construction activity, noise, bright lights, dust and muddy streets for more than three years now.”

She wasn’t expecting a fishing moratorium and is disappointed that it’s apparently necessary to revive fishing. The ever-optimistic mayor said, “We’ll turn carp into Crappie and I know who can make that happen. Buckeye Lake resident Doug Stewart is a nationally know Crappie expert, putting on seminars all over the Midwest. He’s already donated a lot of time to help make Buckeye Lake better. I’m sure he can make carp fishing exciting.”

“Carp are good fighters and it requires some skill to land the big ones,” Stewart told The Beacon. He says fishing at Buckeye Lake is great, buts understands the rationale behind the moratorium. “A one year moratorium should be enough,” he believes. “With some stocking help, fishing will become spectacular.” He will work with Wells to put on some seminars promoting carp fishing.

Some Buckeye Lake for Tomorrow board members liken 2019 as a year-long Carp Fest. Fest co-chair Charlie Prince thought BLT and some of its past sponsors could come up with cash incentives to catch carp all year long. “I doubt that my idea for a carp cook-off will ever fly, but

Some Buckeye Lake for Tomorrow board members liken 2019 as a year-long Carp Fest. Fest co-chair Charlie Prince thought BLT and some of its past sponsors could come up with cash incentives to catch carp all year long. “I doubt that my idea for a carp cook-off will ever fly, but I’m willing to try one more time,” Prince added.

An organizational meeting to form a local Carp Masters chapter is set for 2 p.m. on Sunday, April 1, at the Lions Clubhouse at Lions Park in Millersport. Everybody is welcome! No carp fishing experience is necessary.