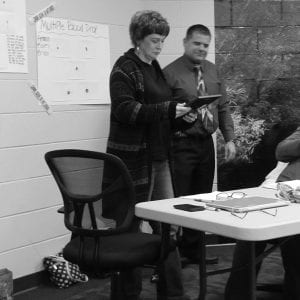 Walnut Township Board of Education member Faye Whitaker reads the plaque presented to her by Board President Tom Cumbow. She was thanked for her 12 years of service on the board and for mentoring Cumbow. Beacon photo by Charles Prince.

MILLERSPORT – Walnut Township Local Schools Board of Education members agreed by a 3-2 vote Monday night to place the renewal of a $250,000 emergency levy on the March 15 ballot.

The district has had two five-year emergency levies dating back to the 1990’s. Both had been renewed several times until board members decided to link the 1.8 mill levy (raising $258,000 a year) to an additional 7 mill levy for the November 2014 ballot. Voters rejected that 8.8 mill levy by a 957-677 vote, prompting the Ohio Department of Education to place the district in “fiscal caution.”

Board members gave up the $258,000 or 1.8 mill levy, asking voters twice this year to approve a 7 mill additional levy. Voters approved 7 mills by a 621-564 vote at an August special election. That approval along with extensive cuts kept the district from slipping into “fiscal emergency.”

Retired district treasurer Diane Spears, who served as interim treasurer for several months and continues to help the new treasurer, said, “I strongly support the renewal of this $250,000.” Former board member Bobby Slater pointed out that the levy actually costs district taxpayers $219,000 a year as the state chips in $31,000 to reimburse the district for the roll-back. If the levy isn’t renewed, that rollback reimbursement will be lost forever, he said.

“It is a renewal,” Superintendent Randy Cotner emphasized. “This is not new money.”

He said the district continues to lose students to on-line charter schools. The 28-29 students enrolling on-line cost the district $2250 each in state funds. To stem the losses the district needs to offer more academic and extra-curricular opportunities to students, he explained.

Deferred maintenance must be addressed, Cotner added. He cited the need to replace a boiler at $100,000, parking lot maintenance particularly behind the elementary school at another $100,000, sealing and re-striping the all-weather track at about $35,000, a new floor cleaner for the elementary school at $5,000, adding air conditioning over the high school computer lab at $12,000, adding air conditioning in the fieldhouse at $20,000 and filling in security camera gaps at $15,000.

“I hate to see our elementary library dark,” Cotner said. The librarian was one of positions cut to eliminate the projected June 30, 2016, deficit which was required to keep the district out of fiscal emergency. Slater also asked that the librarian’s position be restored.

Whitaker emphasized that she didn’t want to push the district back into financial difficulty. “I think we can operate without going back to voters,” she said. “I’m voting for what I believe is best for the district at this time.”

Board member Karen Keller said timing is very important when placing levies on the ballot. While she acknowledged that some voters don’t want to see even a renewal on the ballot, she believes it is important to let the public speak with their ballots.

Whitaker voted “no” again Monday night and was joined by board president Tom Cumbow. Popo broke the tie, by voting “yes,” saying that board member Carol King and Spear convinced him that the voters should have a voice.

In other business Monday night, board members thanked Whitaker for her 12 years service. “It has been an honor,” she said. “It has been wonderful to serve on this board.” Cumbow thanked her for mentoring him. “A big thank you to Mrs. Whitaker,” Cotner added. She was presented with a plaque from the district and a gift from her fellow board members. A reception honoring her service was held after the meeting.

The district’s annul budget hearing was set for 6 p.m. on Monday, Jan. 11, immediately followed by the annual reorganization meeting and then the board’s regular January meeting. Board meetings have moved from the elementary library to the new Laker Learning Center in the high school.