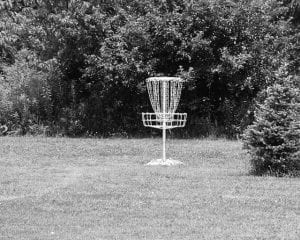 Here’s one of the ‘Pole Holes’ on Hebron’s new disc golf course in Evans Park. Beacon photo by Scott Rawdon.

HEBRON – Hebron has a new golf course, but not in the traditional sense.

Hebron Village Administrator Mike McFarland said the village is creating a disc golf course in Evans Park, which is operational and open to the public now, but the course is still awaiting some features that won’t be added until autumn.

He said the disc golf coursewhich some may remember as a “ Frisbee golf” coursewas Mayor Clifford Mason’s idea. “For quite a long time it didn’t get much attention from council,” said McFarland. But that’s changed, and the village consulted with the Mid Ohio Organized Disc Golf Association, the Ohio Partners for Fish and Wildlife Program, and a growing list of sponsors to make the course a reality.

So, what’s disc golf? According to the Professional Disc Golf Association, disc golf is played much like traditional golf. Instead of a ball and clubs, however, players use a flying disc. The sport was formalized in the 1970s, and shares the object of completing each hole in the fewest number of strokes (or, in the case of disc golf, fewest number of throws) with “ball golf.” A golf disc is thrown from a tee area to a target, which is the “hole.” The hole can be one of several disc golf targets; the most common is called a Pole Hole, which is an elevated metal basket. As a player progresses down the fairway, he or she must make each consecutive shot from the spot where the previous throw has landed. Trees, shrubs, and terrain changes located in and around the fairways provide challenging obstacles for the golfer. Finally, when the “putt” lands in the basket the hole is completed. A golf disc is smaller and heavier than a traditional Frisbee.

“The tall grass and shrubs are obstacles,” said Hebron Administrative Assistant Linda Nicodemus, who’s received phone calls from disc golfers willing to mow down grass or remove shrubs. “We’re not going to mow grass to make (the course) easier,” she said. “It’s an obstacle.” Nicodemus said disc golfers have commented on the utility poles and other obstacles, especially on hole eight. “It’s a tough hole,” she said. Good disc golf courses are designed to be challenging and Nicodemus believes the Hebron course will put even experienced players to the test.

Nicodemus was clear that even though the course is open and people are playing it, it’s very much a work in progress. “Each hole will have a shade tree,” she said, and the course anticipates masonry and a bulletin board with scorecards.

McFarland said he and Nicodemus visited several local disc golf courses including those in Newark and Pickerington and discovered that creating a course is fairly inexpensive – roughly $3,500 for tee signs and pins. Nicodemus said sponsors are paying toward the tee signs and pins, and the Hebron Business Association will donate trees to the park, which will be planted strategically as course hazards. The Ohio Partners for Fish and Wildlife Program is donating grasses and the village hired Ken Rollins, founder of Mid Ohio Organized Golf, to design the course. “Everybody’s excited about it,” she said.

“This is the most interesting and challenging course I’ve been involved in,” said Rollins. He said usually disc golf courses are created on land with plenty of trees and shrubs. Hebron’s course does not.

McFarland said Mason and council members see the disc golf course as a way give back to their community. He said it begins as a nine-hole course (no charge to play it) but may expand to 18 holes. McFarland said residents and businesses have shown their support for the course.

Rollins said disc golf has come a long way. “There are organized tournaments worldwide with Ohio ranking high as well as over 110 courses just in Ohio,” he said. There are more than 3,000 courses globally.

McFarland said several local organizations are contributing to physically creating the course, such as the Licking County Soil and Water Conservation District and a Boy Scout troop, which is helping to plant shrubs and so forth. He said many agencies, businesses, and residents have shown support for the project. “It’s really taken off,” said Mc- Farland.