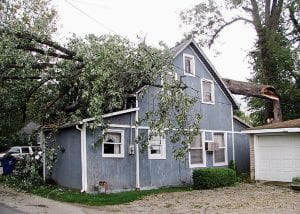 BUCKEYE LAKE – Union Street resident Paul Thompson heard a loud “crack” behind his house Sunday night, and then another. Within seconds, an even louder crash startled him as a massive tree fell through his home’s roof, destroying the second story. Thankfully, both he and his wife, Doris, are unharmed, but the same can’t be said for their house. “It’s tore up pretty bad,” he said.

Sustained 75 miles per hour ripped through the Buckeye Lake area early Sunday evening, toppling trees and interrupting electricity. According to Amer ican Electric Power Ohio’s web site, the storm left nearly 650,000 customers statewide without power, nearly half of whom live in Central Ohio. Power lines were down all over the Village of Buckeye Lake, although power was restored to most village residents Monday night. Thompson said he is fortunate he has a daughter with whom he and his wife can stay nearby while they decide to renovate or replace their damaged house. 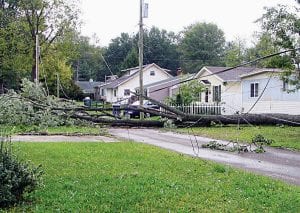 Not everyone in the village is so lucky. A tree fell across the rented trailer of West 7th Street resident Michelle Terry, a single mother of four. Once again, no one was injured, but, “Basically, I’m homeless with four kids,” she said. She said a Red Cross van surveyed the property, but rendered no assistance. “Everybody wants to see the damage, but nobody wants to help,” said Terry. The tree literally fell on one of the children’s beds. Luckily, everyone was out of the trailer when it happened.

Elsewhere around the lake, Thornville Village Administrator Ron Koehler said most power was restored to his village Tuesday night. “We’re in pretty good shape,” he said.

“We are doing pretty well. I believe there are just a few pockets still without electricity,” said Baltimore Village Administrator Marsha Hall. Originally, she estimated about 25 percent of Baltimore residents were without electricity – about 220 residential customers and 10 businesses. North Main Street businesses had power as of Wednesday. 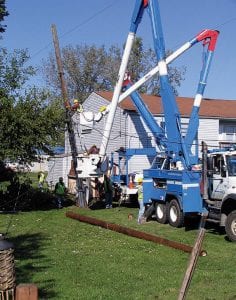 Tragedy did strike north of Baltimore on Clark Drive in Liberty Township. A falling limb is believed to have killed Randall A. Shaffer in his backyard. Shaffer became well known in central Ohio in his efforts to find his missing OSU medical student son. Brian Shaffer was last seen April 1, 2006.

Hebron Village Administrator Mike McFarland said his village fared extremely well. Some places in Hebron’s west side lost power, as did a few random pockets of houses. But, electricity was restored in most of them after several hours.

McFarland said many of the trees were trimmed back from the power lines following the 2004 ice storm, and he believes this saved most of Hebron’s lines from Sunday’s windstorm. McFarland said Millersport, Kirkersville, and Harbor Hills suffered serious damage and as of Wednesday many homes in those communities were still without electricity. Fairfield Beach and Thurston were still dark Wednesday. Walnut Township Schools were closed through Wednesday and weren’t expected to be open Thursday. 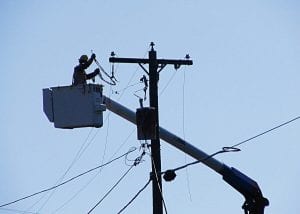 Utility trucks were a rare sight Monday and Tuesday in the lake area, prompting complaints from some out-of-power residents. Outof state help arrived Wednesday. Crews from Consumers Energy based in Lansing, Michigan were working in Kirkersville and Buckeye Lake. Six trucks were in Jennifer Klein’s back yard.

“I told them I would give them some buckeyes to take home,” she said. They weren’t too enthused about the buckeyes, but they were glad to be able to help us, she said. “I”m just glad to see them.” Four crews from Dominion Resources based in Richmond, Virginia got their instructions Wednesday morning in the Pizza Cottage parking lot.

Lakefront residents said Buckeye Lake actually looked like Buckeye Ocean during the wind storm. Waves crashed over seawalls, sending spray onto some homes. Awnings were ripped from pontoon boats and the heavy waves swamped some boats in their slips. Some boats broke loose from their moorings. One canal front resident watched a steady stream of lawn chairs, cushions and umbrellas get blown down the canal and out into the main lake. 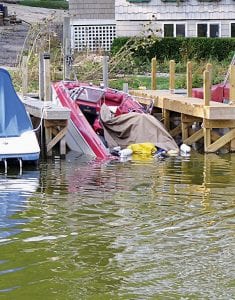 It appears only one tree on the 4.5 mile earthen dam was blown down during the record-breaking storm. It did not affect even the surface of the dam. A few other trees lost some limbs, but ODNR’s fears that a major storm would bowl over trees with their root bases, threatening the integrity of the dam itself, didn’t materialize. 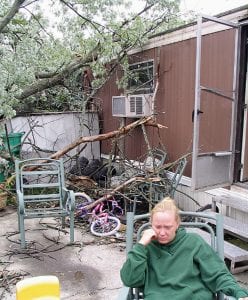 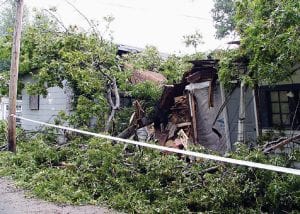 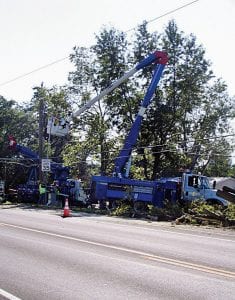 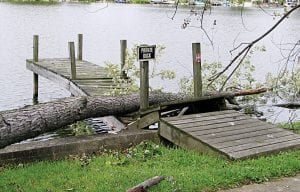