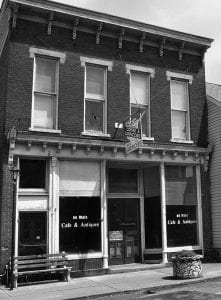 A Main Street landmark will soon be gone. Courtesy photo.

THORNVILLE – Thornville’s downtown historic but dilapidated hardware store building will likely come down at the end of September, barring a miracle.

“More than likely, it’s going to be torn down,” said Thornville Administrator Chad Wilkins. “So many people are saying they hate to see the building go.” Unfortunately, he said, “Everything comes down to money.”

Wilkins said restoring the old building would be extremely costly and there’s not likely to be a good return on investment. He said the village received four bids to demolish the building, and KMA Services of Newark is the low bid at $58,000.

“At this time, council has decided to proceed with demolition,” said Mayor Gavin Renner. “It would take a pretty significant outcry from the community to change direction at this point. Most residents I’ve heard from are saddened by this news and they dislike the situation but seem to understand the reasoning.”

He said people have many fond memories of the hardware store, such as buying supplies, playing in the nail bins as kids, watching the old men talk, or going to the coffee shop that used to inhabit the building. “It’s amazing that a building can be so well loved because of the people and events that took place there,” said Renner. “As a village, we must move forward and look for new opportunities to gather as a community and to prosper.”

Renner has plenty of ideas for the open space left after demolition, which are displayed on the village’s Facebook page, at www.facebook.com/thornville.

“What I would like to imagine is a gathering place in the center of the Village of Thornville,” he said. “A beautifully restored location that enhances local business by providing a private outdoor space where people can relax. Businesses are also invited to leverage the public space to put on events or private parties for the benefit of their customers.

Instead of being a blighted property, the hardware store property would serve as an anchor to attract people to our community.”

Renner said the former hardware store was a gathering place where people often ran into one another and had a conversation and swapped stories. “I’d like to see it become that type of place again whether it’s a park, garden or other similar use,” he said. “I’d like to see classroom space where the children of the community can learn about the arts.”

Renner suggested space for adult learning classes that residents cannot only take advantage of to learn new skills, but also instruct. “Imagine an outdoor amphitheater where bluegrass concerts and Shakespeare occurs on a regular basis in an affordable setting. Also an area where local organizations can hold meetings, in short, a place where the community can come together in the center of town.

“I would like to see investment in downtown that encourages like-minded business owners to start and continue to invest in the appearance and upkeep of their properties resulting in a return on their investment,” said Renner. Adding that this, in turn, places Thornville on a path toward a thriving business culture. “These same business owners would see customers attracted to the village who, instead of spending five to 10 minutes in town getting their mail, spend hours in town chatting, browsing and shopping because the town is attractive, has affordable business space for rent and offers quality and value,” he said.

Renner said a series of steps needs to occur before the building is demolished. First, he said, the council is moving to consider appropriation changes through ordinance and authorize the contract for the lowest and best bid received for the project through resolution. He said he expects this will take place during a special council meeting at 6 p.m. on Monday, Aug. 6, at the Village Office. The contract would then need to be received, reviewed and signed, and demolition plans would have to be approved and a date set. “If I had to give it a ballpark, this needs to be finalized in the next 30 days,” said Renner.

The mayor said the building has a rich history, despite its current condition. “My understanding is that the building at 6 S. Main St. has been a part of Thornville history for over 100 years,” he said. In the first half of the 20th century it served as the local hardware store for the community and Roy Harpster and Noel Zollinger owned it. In the 1950’s, Jerry Blackstone purchased and operated the building. Later, the hardware business closed and the building was sold. Eventually it became the Thornberry Cafe that sold coffee and antiques.

“More recently, the building has been in a serious state of neglect,” said Renner. He said former village administrator Ron Koehler and a few private citizens approached the primary mortgage holder to take steps to preserve the structure by at least repairing the roof. However, no action was taken. Renner said in approximately 2008-2009 the structure was declared condemned as a measure to protect the public. “Since that time, the damage has become progressively worse,” he said. The roof leaks causing damage to some parts of the structure, including the collapse of the second floor. Photos of the damage are available on the village’s Facebook page.

“This year, village council decided to step in,” said Renner. An ordinance was approved in March to authorize the village administrator to purchase the building and work on the project. It was purchased in March at auction for $1. He said there were no competing bids from other parties. Unpaid taxes and liens were erased via the county auditor’s sale. In April, the village took possession. A survey of the property was conducted and a bid package was put together for demolition. Renner said Wilkins started advertising for bids at the end of June. Bids were received and opened on July 19.

Demolition will leave an empty lot at grade with the surrounding buildings. Additional funds would need to be raised or allocated for additional improvements depending on what village officials plan to do.

“Thornville is blessed to have a number of historic structures that beautify the village,” said Renner. “Having historic structures is a double-edged sword however because they are expensive to repair and maintain. It takes persistence, commitment and people to make that happen.” He said a strong economic base is required to create the opportunity to be able to keep them up-to-date.

“The tragedy of this situation is that entrepreneurs have used this building to create local business opportunity and establish a center of the community for over 100 years. Now, because of forces outside of the village’s control that era has come to an end and a new chapter must start,” said Renner.