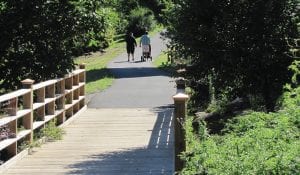 The new trail winds through the oldest part of The Arboretum, creating a pathway from the Visitors Center to the Zand Education Center. While on the trail, visitors can observe an English-style stumpery garden and enjoy the plantings at the Daweswood House Museum. There are plans to complete a loop trail by extending this first phase from where it currently ends at the Zand Education Center back to the Visitors Center.

The Parkwoods Trail is part of a larger initiative to highlight the oldest part of the arboretum grounds and increase visitor accessibility. The route is paved and was designed so that there is never more than a five percent grade, making it easier for strollers and wheelchairs to navigate. This trail was opened in time to allow easier access to our museum and historic sites just as the arboretum recently earned recognition on the National Register of Historic Places. 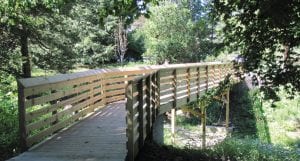 “This is such great news to be listed on the National Register of Historic Places,” said historian Leslie Wagner. “We spent more than a year researching and carefully completing the application while also planning for increased visitor access to our historic sites.”

The main grounds of the arboretum, encompassing 370 acres, are listed on the National Register of Historic Places as a historic district. Including the arboretum grounds and not just the Daweswood House Museum in the nomination truly pays homage to Arboretum co-founders Bertie and Beman Dawes’ contribution to the American conservation movement of the early 20th Century.

After many years of deforestation, forested lands in Ohio had decreased dramatically by the early 1900s. Bertie and Beman Dawes wanted to plant trees on their land and encourage others to do the same. In 1917, they moved to their Daweswood home and began planting trees. In 1923, Beman Dawes began working on his reforestation efforts with Norman Scherer, Assistant Professor of Forestry, The Ohio State University. Scherer suggested trees that would thrive in Ohio and helped properly identify species. Dawes also partnered with State Forester Edmund Secrest who offered advice and supervised early plantings. 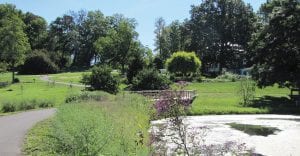 In 1929, Beman and Bertie Dawes founded The Dawes Arboretum on their Daweswood property. According to the original deed of trust, they established the arboretum, “to encourage the planting of forest and ornamental trees and to demonstrate the value of the different varieties of trees for these purposes; for practical and scientific research in horticulture and agriculture, but particularly in the growth and culture of trees and shrubs able to support the climate of the state of Ohio; in order to give pleasure to the public and education to the youth; and to increase the general knowledge and love of trees and shrubs.”

Today, The Arboretum is made up of nearly 2,000 acres with more than 17,000 labeled plants. The arboretum hosts scientific research, youth and adult education programs, land conservation projects, and more than 250,000 visitors each year who come to enjoy trees and the natural world.

“We hope our listing on the National Register of Historic Places reminds everyone of the debt of gratitude that we owe Bertie and Beman Dawes and other conservation pioneers, said Executive Director Luke Messinger. “Because of their generosity and forward thinking, people are able to experience nature and appreciate trees at The Dawes Arboretum.”

The arboretums’ historic district status recognizes historic buildings on the grounds including the Daweswood House Museum. Originally built in 1867 by the Brumback family, the Italianate-style home became the Dawes family’s country get-away.

The Dawes Arboretum plans to add a plaque to its grounds announcing the arboretum’s status on the National Register of Historic Places in the coming months.