The North Bank hand pump stand was the last of 19 community water wells that supplied drinking water to residents in the first half of the 20th century, according to Buckeye Lake Area Historical Society Executive Director J-Me Braig. Her mother, local historian Donna Braig, was working on a history of the community wells when she passed away last summer. J-Me said she had been keeping an eye on the pump that was on the former Chuck Taylor property, a few houses west of the AMIL Spillway. She had told ODNR that she wanted the pump for the Buckeye Lake Museum if it was removed.

J-Me said a neighbor called her Monday to report that the pump had been removed. Neighbors report that a Ruhlin loader intentionally removed the pump using the blade on its bucket. The “official” explanation is reportedly that a piece of equipment accidentally backed into the pump.

When J-Me learned the pump was gone, she called the park office in an effort to track it down. Since it was Monday, the park office was closed and she eventually ended up speaking to dam project spokesperson Heidi Hetzel-Evans. As of Thursday morning, J-Me had not heard back from Evans.

Several neighbors pointed out that Ruhlin was not following the state regulations they had to follow to seal their wells after the village installed it’s first ever public water distribution system in 2009. They recalled spending at least $500-600 to have a registered water systems contractor seal their well and submit a report to the local health department.

This writer asked the workers, attempting to fill the well with concrete, if they had a permit to seal the well. They said the permit was at the local Ruhlin field office in the former Nautical & Nice building on Ohio 79. This writer went to the field office to review the permit and was told by a (the?) manager that the permit was at general contractor, ASI’s office on Liebs Island. A question about who to contact about the permit there was angrily answered “anyone.” A comment from this writer that he felt he was getting the “run around,” resulted in an angry demand to get out of the office. A comment, that this writer only wanted a name for an inquiry about the permit, brought a now very loud and angry manager to his feet and charging toward him. The manager was demanding that the writer get off their private property immediately. Realizing that he was probably a few moments away from being physically ejected from the building, this writer left.

Ohio Administrative Code 3701-28-17 details the procedure for sealing a private water system well. The intent of these rules is to demonstrate “that the well will not cause or contribute to contamination of the ground water supply, present a safety hazard or present a public health nuisance.”

While the specific procedures for sealing a well are complex, it can be safely stated that dumping concrete by gravity down a well hole containing water (neighbors dropped a rock down the well hole and heard it hit water, roughly estimating its depth at 40 – 50 feet) does NOT meet the requirements of 3701-28-17.

This is another example of the culture that ODNR has created on this project: Its actions and those of its contractors are not subject to the rules everyone must follow. Back in April 2016, an Ohio EPA inspector, responding to a neighbor’s complaint about hazardous cement dust emissions, discovered that neither of the two cement bulk plants operating on the stability berm had the required Ohio EPA air permits. A few weeks after the permits were issued, a bulk tank was overfilled, covering most of the Rosebraugh area with a coat of cement dust. In addition, dust control from construction activities during 2016 was practically non-existent. Though it improved when construction finally resumed last summer, it often doesn’t meet Ohio EPA standards. An AMIL spillway area resident told The Beacon that dust was particularly bad on Monday. 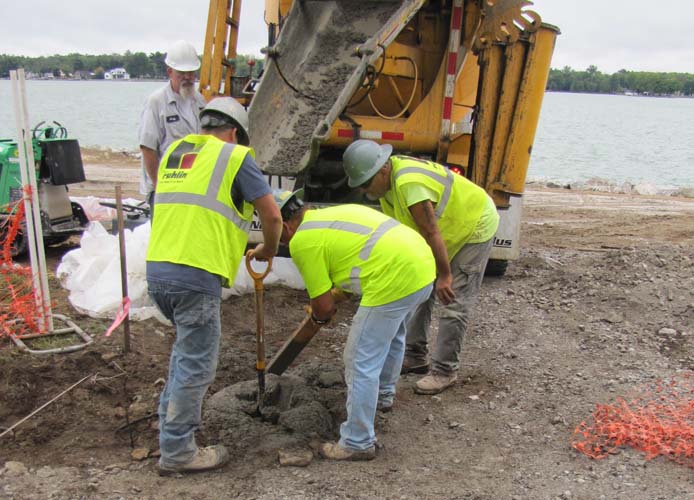