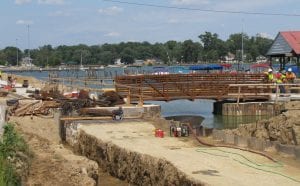 Top, the new bridge to the Buckeye Lake Yacht Club is now open to pedestrian traffic. Most of the dam construction activity is now centered at the yacht club. Below, a new trench has been dug behind what appears to be a buttress wall of some sort behind the new steel sheet pile wall heading west from the yacht club. It will presumably be filled with concrete and the ‘buttress wall’ will be topped with a concrete cap. In the top photo left middle, the concrete cap is already in place and extends nearly to the North Shore Park.

BUCKEYE LAKE – We were too pessimistic. The Ruhlin Company did get the new jetty and associated work done in time to allow water to flow into the new AMIL channel last Friday.

Reopening the channel brought some night-time relief for nearly neighbors. For the first time in months, the generator powering the pump that kept the new channel dry was turned off. One neighbor said sleeping suddenly is much easier and refreshing. He can hear the birds again.

Though there is still work to be done at the AMIL spillway – installing the new prefabricated bridge across the channel and removing the earthen causeway that currently allows construction traffic to move up and down the entire dam, most activity has shifted to the Buckeye Yacht Club area. The new bridge is now open to the club.

However, there is still quite a bit of concrete to be poured. It looks like a reinforced concrete cap and wall will be poured on top and behind what appears to be a ‘buttress wall’ of some sort behind the new steel sheet wall. 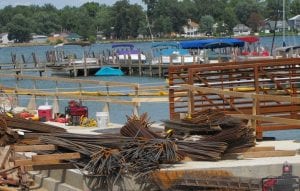 Top, steel rebar is stacked by the yacht club. Below, just the top of the new stainless trash cage is above water. The right side of the top opens to allow debris removal.

Sidewalk construction continues along West Bank and the more western portion of the North Bank. It hasn’t reached the AMIL spillway yet, but is getting closer. 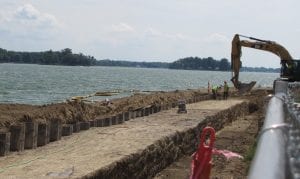 Below right, the new jetty that will protect the AMIL spillway was completed quickly last week. The compacted earth was topped with a heavy geotextile which will eventually cover the top. The sides have already been covered with limestone rip rap as will the top. Below left, a new bridge will span the new channel to the AMIL spillway. It will run from the pad in the foreground across the channel. It will be a bit longer than the existing bridge over the spillway, but nothing like earlier rumors of a 120 foot long bridge. 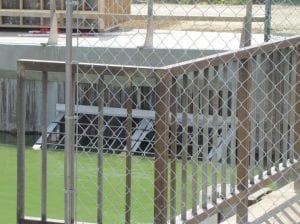 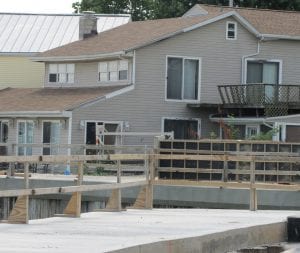 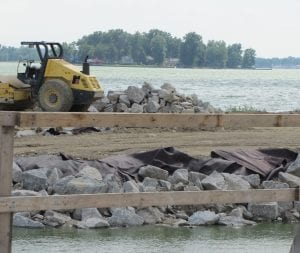