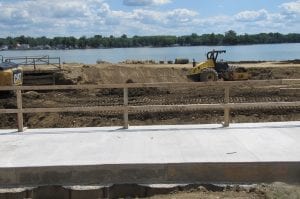 In the foreground is the first of the two steel sheet pile walls that make up the new dam in this area; the second is below the temporary railing for the concrete pad that sits on top of the concrete that fills the area between the two steel sheet pile walls. In the center, a dozer is spreading and compacting earth to build the jetty that will protect the channel. It will be covered with rip rap limestone. The earthen causeway beyond the dozer, which allowed vehicles to travel up and down the dam, will be removed once a prefabricated bridge is installed across the completed new channel. Below right, the trash cage is now in place. The hinged top, which allow debris to be removed, is still open. Below left, technicians check the compaction of the earthen base for the jetty that will protect the new channel from wave action.

BUCKEYE LAKE – Construction activity continues to be focused on the AMIL spillway in the Village of Buckeye Lake and at the Buckeye Lake Yacht Club.

The new channel to the AMIL spillway will be L-shaped . An earthen and limestone -protected jetty running parallel to the new dam will extend eastward toward the yacht club. A prefabricated bridge will be installed over the new channel. The earthen causeway that allowed continuous vehicle traffic up and down the dam will be removed.

We have heard reports that the rebuilt channel could be reopened to the lake as early as Friday. As of Wednesday afternoon, that appears to be a very optimistic date as the jetty is only partially built and still must be covered with limestone for erosion protection.

It appears that final grading for the installation of the concrete cap that will protect the seepage barrier and buttress wall has been done from the AMIL spillway east to the North Shore park. Portions of that cap are already in place around the AMIL spillway channel and at the yacht club. 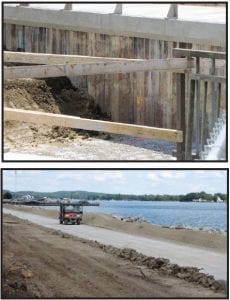 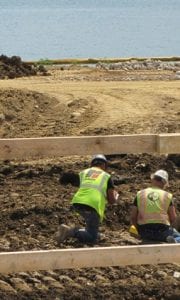 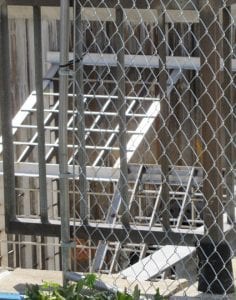 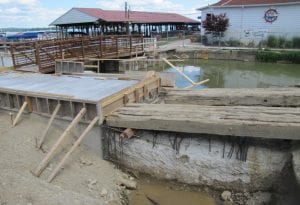