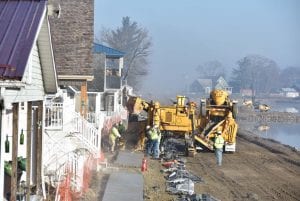 Sidewalk construction started on the most western portion of West Bank this week. This area hasn’t had sidewalks in the past. The sidewalk was supposed to begin four feet from the property line, but looks much closer. In the top left photo, steps from a porch are protruding into the new sidewalk. Area residents are upset that the sidewalk is being constructed so close to their homes. In the bottom left photo, an ODNR contractor has exposed a second steel wall along a portion of the North Bank. Some areas of the North Bank have two steel walls plus a masonry wall in addition to the earthen embankment. The multiple barriers help explain why ODNR was unable to provide any evidence of consistent seepage even though officials claimed dam failure was imminent. Courtesy photos. 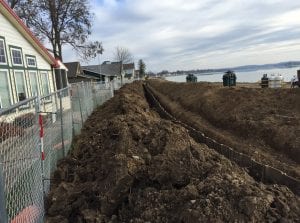 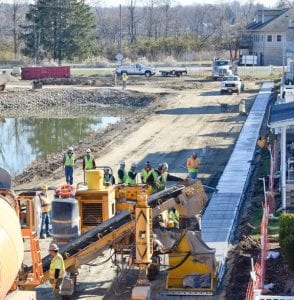