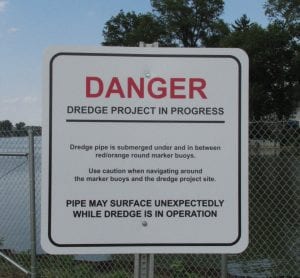 More detailed dredge warning signs were recently placed at Buckeye Lake boat ramps. The new sign, at left above, warns that the dredge discharge pipe is submerged, but may “surface unexpectedly while dredge is in operation.” The sign also says the discharge line is marked with red/orange round buoys. At right is what a boater encountered on June 13 heading north between Onion Island on the right and Lieb’s Island on the left. The horizontal crease about halfway up the photo is the discharge line floating just below the surface. While the boater was aware of dredging activities in the general area, there were no buoys on this portion of the line between these two islands. The boater only noticed the barely submerged pipe after a seagull landed on it. More buoys have reportedly been placed since last week, but boaters should be particularly cautious around dredges and watch closely for the discharge lines. 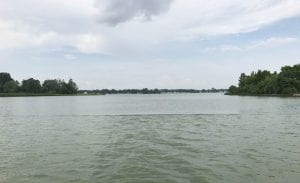 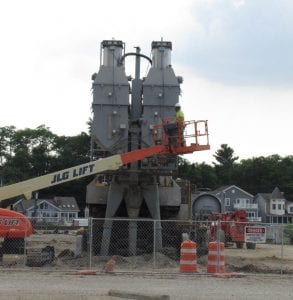 DeWind’s new trencher got in the dirt this week at Lieb’s Island. It started mixing soil with its P-shaped, triple cutter-head in the constructed test pit. The test pit is some 200-feet long, by 14 feet wide and 12 feet deep, dug into the boat ramp parking lot. In the photo, the cutter-heads are fully extended into the test pit. The three tubes extending into the pit are the cement supply lines. The new machine mixed about eight feet of the test buttress wall before shutting down for maintenance.