Dam project off to a slow start 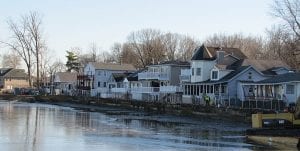 LIEB’S ISLAND – Dock removal is going much slower than anticipated.

Removal began in earnest last week along West Bank. Project construction manager, ASI Constructors, Inc., is using a tracked amphibious excavator that moves through the shallow water at the base of the dam wall.

It is a slow process as the excavator slowly lumbers back and forth to the Lieb’s Island staging area with individual dock sections. An observer Tuesday noted that the four to six worker dock removal team has increased the size of the debris loads carried back to the staging area over the past week.

Nevertheless, it has taken about a week to remove the first 12- 14 docks. Each dock post is removed individually by wrapping a chain around it and then raising the excavator’s bucket.

The team was expected to turn the first corner on Wednesday and then the number of docks thins out up to Ballard’s Lane. But as the work proceeds along West Bank, it takes longer and longer for the excavator to carry the debris to Lieb’s Island and then move back up the dam. 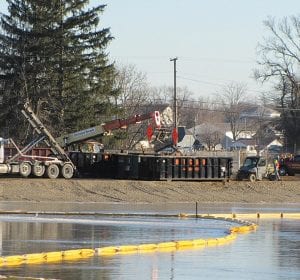 The time line incorporated in ASI’s contract with ODNR lists a Dec. 4 start date for dock removal and a Dec. 19 completion. Work actually started three weeks later and looks likely to extend well into February. The effectiveness of the amphibious excavator in the deeper water along the North Bank wall is also questionable.

Meanwhile, six large dump trucks wait at Lieb’s Island to start hauling bank run to construct the new 30-foot wide stability berm in front of the existing dam. Little has been added to the bank run stockpiles at Lieb’s Island and the North Shore in the past two weeks. 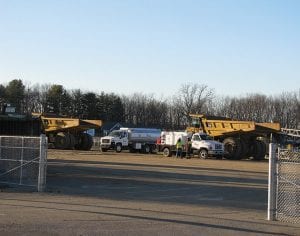 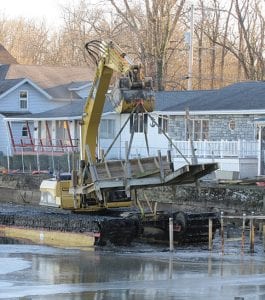