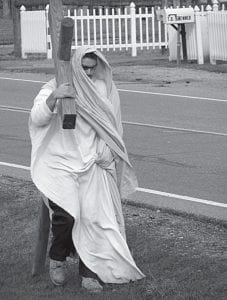 The pastor of The Gathering, FairfieldBeach’s non-denominational church, spent a good part of Good Friday helping several people take shifts dragging a large wooden cross completely around Buckeye Lake. The walk began at 6 a.m. and lasted well into the afternoon.

“We want to point people to Jesus,” he said. Gill wouldn’t identify specificallywho the cross walkers were or their numbers; he only said they were “a group of people as one,” including both genders.

With all the violence happening in the world, Gill said the cross walk was a sign of peace for Easter weekend. For some of the walkers, the experience was reminiscent of their own personal journeys. One walker in particular, said Gill, has faced many challenges. He just happened to drag the cross along a hilly and curvy section of Ohio 13. “This is the way my life has been,” said the walker.

Gill said even though the cross is heavy and awkward to carry, most of the walkers had a hard time giving up the cross at the end of their shifts. They found the experience peaceful.

“When you don’t think you can go on, you can go on. There is no easy to carry the cross,” said Gill, “but everyone can.”