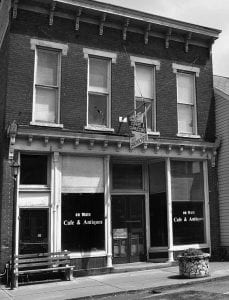 The fate of this Main Street landmark is still up in the air. Courtesy photo.

THORNVILLE – To destroy or not to destroy; that is the question the Thornville Village Council debated Monday night during a special council meeting.

Although Mayor Gavin Renner said council generally favors tearing down the old Thornville Hardware store building in the village’s downtown, some question does remain as to whether it can be saved. Village officials invited architect Bob Loversidge, president and CEO of Schooley Caldwell Associates, John McGaughey, president of the Perry County Historical Society, and Somerset Mayor Tom Johnson to talk about the building’s condition and if grants are available to save it.

“It’s not as bad as it looks,” said Loversidge of the old hardware building, which has been condemned. He said the structure mainly suffers from water damage. “Really what destroys buildings is water,” he said. “The walls are in decent shape,” although the roof has gaping holes and the second floor collapsed. “It’s rehabable,” said Loversidge. He said the village could consider stabilizing the structure so it doesn’t become worse, then find the right buyer.

“A vacant lot is a failure,” said Loversidge. “It represents that a bad thing has happened.”

Council member Dale Brussee disagreed, saying there were buildings where the village’s Memorial Park is, next to the police station and the village offices. “An empty lot can have a purpose,” he said, adding that Thornville isn’t in the business of buying old buildings and revamping them. “When we bought it at auction, no one was interested,” he said. Brussee said the village now has a $60,000 donation to tear the building down. “We’ve had to endure and look at this building for about 10 years in the condition that it is. As a village, I don’t think it’s justifiable to put taxpayer money into it without getting a dime back.” He said the donation is from a private individual and it makes more sense to take advantage of it. “We’ve tried for years to get grants,” said Brussee.

Renner said the village is under no obligation to accept the $60,000 until legislation is passed.

Council President Mary Renner said the village has only owned the building for four months. “I believe this deserves a little more time than rushing (the legislation) through,” she said.

“If it were me, I wouldn’t tear the building down,” said Village Administrator Chad Wilkins, who wished the private donation could be used to save it.

“The money was offered a year ago; this is not an overnight thing,” said Fiscal Officer Melissa Tremblay.

Ultimately, the council tabled legislation to accept the $60,000, mainly because Mary Renner said the legislation was revised that day, and she believed council members should take the time to read it and consider it before casting a vote. Wilkins said Wednesday that council may have another meeting to consider the legislation Monday, and he intended to ask Shelly or a representative if Shelly would consider extending the deadline a little further.