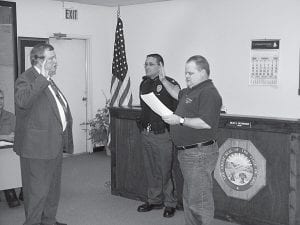 Millersport Mayor Dean Severance, right, gives the oath of officeto Harold Crabtree while interim Police Chief Randy Lewis looks on. Crabtree is the village’s first auxiliary police officerand its most experienced. He served 26 years with the City of Columbus Division of Police with most of his service in the Detective Bureau. Crabtree also was patrol commander at Port Columbus for 10 years and was a deputy Ohio Attorney General. Beacon photo by Charles Prince.

MILLERSPORT – Village council members unanimously agreed that attorneys should turn the “nuts and bolts” draft for the bulk sale of water to the Village of Buckeye Lake into a legal document.

The draft, worked out between the village’s Board of Public Affairs and several Buckeye Lake officials, was distributed to council members just before Tuesday night’s council meeting.

Michael Carder, president of GGC Engineers who serves as the village’s engineer, explained the draft to council members. “It (the draft) is not intended to be a legal document,” he said. It’s now up to both village solicitors to turn the basic agreement into a legal document, Carder added.

The agreement provides for the sale of up to 600,000 gallons per day to Buckeye Lake for $3.15 per 1,000 gallons. Buckeye Lake will pay the existing capacity fee of $306,000 upfront. Once that’s paid, Millersport will begin construction of a water line extension up Ohio 79 to Buckeye Lake corporate limits.

That extension is expected to cost Millersport about $900,000, but Carder believes some of the cost will be paid with grants. The line extension will also benefit Millersport customers, council member Dave Levacy said, by looping the system and providing more capacity for firefighting. Design and construction could take up to 18 months, but it could take Buckeye Lake up to two years to start construction of its distribution system, Carder said.

Carder said one change in the draft was identified at Monday night’s Board of Public Affairs meeting. The draft described a 30 year agreement with a 15 year minimum term. Levacy said the Ohio Revised Code limits the term to 20 years so the village wants to move to a straight 20 year agreement.

Carder also had good news on the new water treatment plant. Operators plan to switch over to the new plant during the first week of March. Some site work will still have to be done when weather improves, but construction is basically complete, Carder said.

“Now we can be a regional provider of water in the area,” he added. “That was the intent.”

With the new water plant nearly on line, the focus is switching to upgrading the village’s waste water treatment plant. Carder said two applications for state Issue II assistance scored well during evaluation and will likely be funded later this year. One is a $320,000 zero interest loan for 30 years. The other is a $185,000 grant. Both will be used to construct a flowequalization basin. The new basin will be used to store surges in flows to the plant. Carder said the plant does a much better job when a steady flowis maintained.

In other business Tuesday night, council members authorized interim fiscal officerVince Popo to seek bids for commercial and residential trash pickup in the village. The village’s current two-year contract with Waste Management expires at the end of March.

“I’ve got a lot of complaints this year,” Mayor Dean Severance said. Early pickups at businesses, generally around 2 to 3 a.m., has been a consistent complaint from irritated neighbors awakened by the banging noise. The contract says pickups can’t begin before 6 a.m. There have also been complaints about spilled waste, leaking hydraulic oil from collection trucks and damage to streets.

“Hopefully, we’ll get several bids this year,” Severance added. Big O Refuse and Rumpke have expressed interest in the contract. Anyone wanting to comment on service or contract issues should call Popo at 467-2333. Council member Paul Detty wants to hold a pre-bid meeting with any interested companies so each bidder clearly understands the village’s expectations before they submit a bid. He also wants to make sure the new contract includes opportunities for special clean-up days.

Residents who rented one of the village-owned boat docks should be getting a renewal letter sometime next week. The $250 rental fee is the same as last year. Payment of at least 50 percent will be due March 11 with the balance due April 8. Any docks not rented after April 8 will be available to non-residents on a first come, first served basis.

Council took action on several items raised by interim Police Chief Randy Lewis. He had served as a full-time captain until part-time Police Chief Ed Arledge resigned. The village will be advertising for a permanent chief. Lewis is expected to seek the post. Council agreed to declare a number of obsolete items surplus, including a 1995 Ford Taurus cruiser. Lewis was also given permission to properly dispose contraband, some of which has been around since the mid-90’s.

At Detty’s suggestion, council agreed to purchase a refurbished hand-held laser radar unit for $2,895. Council member Jim Wright collected $600 in contributions which will offset the cost to the village. Donations were received from Buckeye Lake Eagles, Millersport American Legion, Millersport Farm & Garden, Millersport Realty, Whetstone Medical Clinic and Paul and Anna Whetstone. Police will use the laser gun to increase speed enforcement efforts in the school zone and on residential streets.

Council’s next regular meeting is set for 7 p.m. on Tuesday, March 11 in the village hall.