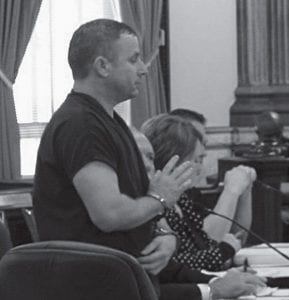 NEWARK – A long and difficult chapter in the Village of Buckeye Lake’s history came to a close January 9 as Licking County Common Pleas Judge John Spahr sentenced former Buckeye Lake council member John Cortez to 17 years in prison for 23 counts of unlawful sexual conduct with minors, one count of providing cocaine to minors, and a felony weapons charge.

When Cortez is eventually released, he will be registered as a Tier II sexual offender and required to register his address with authorities each six months for 25 years.

Cortez, 42, pleaded guilty to all charges.

Cortez’ lawyer, J. Elliot Van Dyne, requested Spahr consider what the case did not involve, specifically no violence, no profiteering, and no prowling of victims. "He became involved with three young men already involved in group sexual activity," said Van Dyne, adding that Cortez was severely cocaine dependent at the time, which may have "clouded" his judgment. He said Cortez was provided cocaine, which he used.

Van Dyne said when Cortez fled to Myrtle Beach, S.C. when his arrest was imminent, he received "faulty quasi-legal advice. John Cortez is not the monster he’s been portrayed," said Van Dyne. He said Cortez was genuinely remorseful, he allowed other to exploit him, and he’s "done a lot of good in his life." Van Dyne said Cortez did not own the guns found at his home during a raid-Cortez is a previously convicted felon and not allowed to posses firearms.Van Dyne asked Spahr for a sentence with a five year review and nine years or less total – any longer would remove Cortez’ incentive to improve.

Cortez made an emotional plea to Spahr. "I was very stupid," he said. "I am very sorry for what I did. I am not a threat or the monster they make me out to be."

Licking County Assistant Prosecutor Tracy Van Winkle said the case wasn’t just one incident with a lack of judgment. There were three victims and Cortez never said the crimes were his fault or that he was the adult in the situation.

She said Cortez may not have been out trolling for minors, but he was looking for them. "He failed at every turn to exercise adult judgment," said Van Winkle. "It’s up to the court to protect the public." She asked the judge for a 12-year sentence for the sex crimes and looked to the wisdom of the court for the remaining charges.

Spahr said his first duty is to protect the public. He said there are three clear victims in this case, but Cortez also victimized his family, his community, and his victims’ families. "Your conduct was absolutely inexcusable," Spahr told Cortez.

Basically, Spahr sentenced Cortez to four years for each victim of the sex crimes, four years for supplying them with cocaine, and an additional year for the weapons charge. Spahr believed consecutive terms were necessary to illustrate the seriousness of the offenses.

"We’re very pleased with the sentence he received," said Van Winkle after sentencing.

Tailgate Ministries Pastor Beverly Myers, who’s worked to help bring Cortez to justice said, "The court spoke well." She added, "Hopefully the families will get their lives back on track."

"I was in the courtroom for the sentencing and there was nothing to cheer about," said former Buckeye Lake Council member Peggy Wells, who helped Myers in her efforts to bring Cortez to justice. "It was difficult to sit there and hear John confess to all the charges detailed by the prosecutor." She said she felt sorry for the victims’ Wells. "John should have stepped up and taken responsibility for his actions instead of being so defensive. I can’t help but think that the comments from both of them added years to the sentence." Wells believes Cortez should’ve made clear he understood what he had done to everyone, but he seemed only to be concerned with himself. "What could be the best years of his life, he will now spend in prison," she said. "I agree with Judge Spahr that there were many victims in this case, including the community as a whole."

A mother of one of the victims, who preferred to remain anonymous, said the victims "are doing okay. Hopefully, they can put all this behind them."