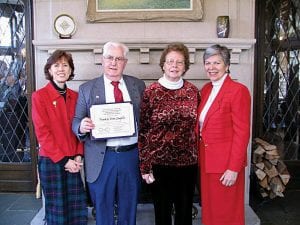 COLUMBUS- Who says good deeds go unnoticed? Feb. 13, Ohio First Lady Frances Strickland honored Frank and Doris Laughlin of Hebron for their service to the community. Strickland honored 31 couples Friday morning for their dedication to volunteerism and marriage at the governor’s residence in Columbus as part of the Joined Hearts in Giving program, sponsored by the Ohio Department of Aging. Joined Hearts in Giving honors Ohioans who are dedicated to volunteerism and married for 40 years or more.

The Laughl ins ar e married for more than 47 years. Each month for the past five years they volunteered to help assemble more than 8,500 Zerger Times newsletters the Licking County Aging Program distributes throughout the county, and they’ve volunteered for the Salvation Army for the past six years. They were a scoutmaster and a den mother, and donated their time to local scouting clubs. Frank Laughlin was a Harrison Township Trustee for 24 years, was involved with the fire department, and is active with the Red Cross, donating his 150th pint of blood in December. Doris Laughlin led a Bible Good News Club after school for 12 years. 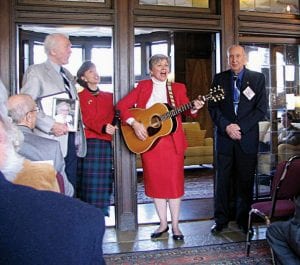 Frank Laughlin said sons basically recruited him as a scoutmaster-a position he was happy to fill. It didn’t take long for Doris Laughlin get in on the action, too. “We included God as the third person in our marriage,” said Doris Laughlin of the couple’s nuptial longevity. Keeping the lines of communication open is essential and “A sense of humor does help, yes,” she said.

Cheryl Barber of the Licking County Aging Program nominated the Laughlins. “They get really involved with everything,” said Barber. 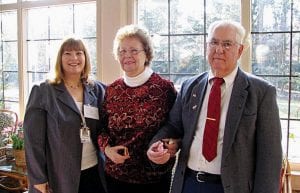 “These couples share a deep commitment to each other and to their communities,” said Strickland in an Ohio Department of Aging press release. “I am pleased to recognize them for giving so generously of their time through volunteerism and serving as role models for younger generations.”

“Without the valuable contributions of time and energy that these couples volunteer, many programs in the state, such as Meals on Wheels and volunteer longterm ombudsmen, could not function,” said Barbara Riley, Ohio Department of Aging director, in a press release. “I am impressed and grateful to them for their efforts.”