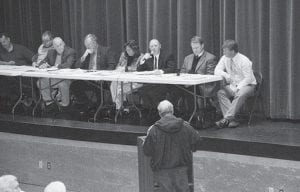 Licking County Water and Wastewater Director Ken Salsberry, third from the right, responds to a question during the January 31 public meeting on the proposed 69 percent sewer rate hike. He is flanked on his right by Licking County Commissioners Marcia Phelps, Tim Bubb and Doug Smith. Beacon photo by Charles Prince.

HEBRON- It was a tough night for the Licking County Commissioners Jan. 31 as more than 400 residents packed the Lakewood High School auditorium to voice objections over a 69 percent sewer rate hike proposed by the county.

If imposed, monthly sewer rates for Buckeye Lake Sewer District residential customers will rise from $29 to $49 possibly starting February and increase annually until residents are paying $62 per month by January 2012. The overall rate increase is 115 percent.

The reason behind the proposed rate increase is a $9 million upgrade and expansion of the Buckeye Lake Wastewater Treatment Plant required by US EPA and Ohio EPA. While many residents attending the public meeting understood the need for a rate hike, most agreed that a 69 percent increase is unreasonable and unaffordable, and some proposed options for keeping the costs down.

Most residents who spoke during the public meeting also agreed that Buckeye Lake Area Civic Association President Merv Bartholow – the first speaker of the evening – summed up many of their concerns with the rate hike.

“It seems like deja vu all over again,” he said, referring to a 66 percent sewer rate increase the county proposed nearly eight years ago. Today, “Why are current customers being asked to pay an amount equal to the entire cost of the expansion project over the next six years?” asked Bartholow. He said the total cost of the expansion project is $9,036,500. The total revenue over the next six years from proposed increases and estimated tap fees is $8,927,080.

” In your proj e c t ions , ” Bartholow continued, “you increase (employee) salaries and benefits at the rate of nine percent per year.” However, he said, actual results for the past fiveyears have averaged less than six percent per year. He said the county plans to increase contractual services by four percent per year and the county didn’t apply for low interest loans, which he believes are available through the Ohio EPA.

“We certainly understand the need to pass along increased costs to your customer base from time to time,” Bartholow said, “but to request these kinds of increases are not in the best interest of the community and do not seem to reflect the actual needs of the Buckeye Lake Sewer District.” He said the county is asking the community to hand over an additional $36.3 million over the next 20 years to pay for a $9 million project.

Bartholow believes the entire cost of the project is being passed to the existing customer base. There are no provisions to increase tap fees for new customers nor are any requests being made of developers to contribute to the project. “The interest rates that are being quoted are far higher than they should be, with the costs being passed on to the current residents,” he said. “There appears to be no management controls in place to reduce operational costs. In fact,” the daily costs are projected to increase at a higher rate than actual past experiences would support.

“We respectfully request that you take another look at the financing of this project and examine additional options that could reduce the impact on the existing customers,” said Bartholow. He understands there is a “certain urgency” to move forward, but the long term consequences of the proposed rate hike should encourage the commissioners to consider all options before making a final decision.

“I share (Bartholow’s) concerns,” said Buckeye Lake Mayor Frank Foster, adding that the Buckeye Lake Village Council sent a letter to the commissioners, asking them to reconsider financing options. “This, to me, is not just unpopular,” he said, “it becomes unaffordable for customers.”

Joe Robertson of Seasongood & Mayer, who is handling revenue bond financing for the project, said, “Financing is not permanent at this point,” and other options can be explored.

Licking County Commissioner Tim Bubb, who heads the three-member board of county commissioners, said counties and townships cannot impose impact fees (charges to developers to help pay for services needed by residential and commercial construction), only municipalities. He added that the sewer plant improvements are government mandates and they are not being made to service the nearly 1,000 new homes anticipated over the next several years.

“Whether one customer i s added or 1,000, the s e improvements are mandated,” he said. “It’s not an issue of the number of customers.” In fact, more customers on the system would help to reduce everyone’s bills, Bubb added.

Li cking County Wa t e r and Wastewater Director Ken Salsberry said US EPA and Ohio EPA fined the county a total of $75,000 for effluent violations, including retention basin overflow.”We’ve got a 50 year old system built in a swamp,” he said. If plant upgrades aren’t made on time, the county would face additional penalties already detailed into the consent decree.

Buckeye Lake resident Ray Harris felt blindsided by the 19 day notice of the proposed sewer increase. “A 19 day notice is not sufficientnotice,” he said. Harris said that developers should foot more of the cost. An increase the size of what’s proposed “may mean whether we eat or not,” he said.

Buckeye Lake resident George O’Donnel said the county has put off the situation for an “inordinately” long period of time, forcing the county to propose rates that are “unconscionable.” He wondered if the commissioners delayed discussing this situation until after the most recent election so it didn’t interfere with campaigns for county commissioner.

O’Donnel said he was shocked by Salsberry’s statement that some of the numbers on the spreadsheet justifying the increase were “on the high side” to satisfy financing. “You have not served the people in this room well,” O’Donnel told commissioners. “You’re going to have problems the next time you come on the ballot.”

Buckeye Lake Estates owner Ron Younkin suggested phasing the rate increase slowly, maybe increasing from $29 per month to $39 per month, instead of $49. “It may be more palatable,” he said. “Many residents may move away, and you won’t get the revenue anyway.”

Bernie Schick, a seasonal Buckeye Lake resident, challenged commissioners to look into the Water Pollution Control Loan Fund. The district may qualify for a 1 percent rate.

“We need to look at ways to bring this down,” he said. “It’s too much for these folks.”

“You have failed us. I couldn’t be more disappointed in my county commissioners,” said former Buckeye Lake Village Council member Peggy Wells. “You could save $8 million if you’d just put your heads together.” She believes Licking County could use a county administrator to help keep the commissioners from being “spread thin” and who could help explore issues like interest rates for county projects. “I’m going to think long and hard of how I vote” in the next commissioners’ election, she said.

Phelps said after the meeting that changes may be made to the proposed rate hike. “I am putting a lot of time in on this issue,” she said. “I’m not sure if my time will result in reducing the monthly rate proposal structure, but I’m hopeful. We have asked the bonding representative, the engineer, and (Salsberry) to make additional changes that may result in a lower rate.”

There is no specific date set to enact the new rates. Commissioners want to make the change before the March bills go out for February’s service.