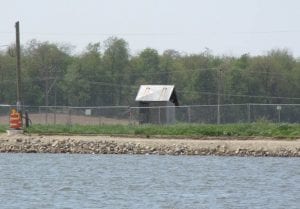 The Licking Fairfield Corporation’s pump protects some 200 acres of prime farmland and Millersport Road by pumping stormwater through the dam into Buckeye Lake. Beacon file photo.

The ban setting a July deadline that has been informally extended to November came in a March 3, 2017, letter to dam front property owners from Michael D. Bailey, Chief of the Division of Parks and Water Craft. Bailey’s letter stated, “We do not believe major infrastructure improvements will be needed to accommodate the vast majority of them (drainage connections). For privately installed water collection and pumping systems operating on the West Bank, ODNR will allow affected private property owners to reroute their storm water to the reservoir feeder canal several hundred feet away.”

• A pump protecting the Ballard Lane portion of the West Bank; and

With Columbia’s veto of ODNR’s suggested ‘southerly solution,’ the commissioners write, “…we estimate costs of $750,000 or more to reverse drainage flows to the west and north, to alter the Lateral A Joint County Ditch, and to accommodate potential modifications for the ODNR Division of Wildlife’s canal to the fish hatchery and the ODOT culvert under State Route 360.”

The letter concludes, “We urge ODNR to allow a single dam penetration (or an over the top solution) under the County’s oversight. By allowing this, the solution will alleviate financial burdens places upon residents.”