Commission approves development, but not bridge 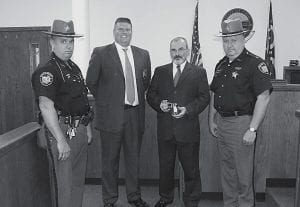 BUCKEYE LAKE- The Buckeye Lake Planning Commission unanimously approved a new development called The Landings at Maple Bay, but acknowledged that the design of a proposed Hunts Landing Road bridge slated to cross the development’s feeder canal needs some work.

The Landings at Maple Bay is a 78-unit condominium development located on the southwest side of Hunts Landing Road in the Village of Buckeye Lake. It includes a man-made canal, a marina with boat slips, a boat storage area, and a clubhouse with a pool.

Jim Lenner, a planner with the Licking County Planning Commission, said that while the overall development plan is good, the county planning commission had several concerns–including storm water management, plans for the Hunts Landing Road bridge across the feeder canal, wetlands determination, and marina approvals–and recommended the village table the development until all the issues were addressed.

But, Buckeye Lake Planning Commission Chair Karen Cookston said the developer had remedies for all of the county’s concerns which were included as conditions for approval of the development. She said the village planning commission did not approve plans for the bridge and construction will not begin until all its concerns are addressed. “All parties agree some adjustments (to the bridge) are necessary,” said Cookston. “This clearly is a work in progress.”

She said that many people attending a July 10 Buckeye Lake Planning Commission meeting wanted to delay approval of the development until plans for the bridge were approved. Cookston said it’s necessary to attain permits to begin the building process before winter weather arrives; winter weather would delay construction and be very costly for the developer. She said village planning commission members agree that more time is needed on the bridge design and “it would not be prudent” to rush the bridge in order to get the building plans under way. “With the plans approved, one phase of the project can begin,” said Cookston, confirmingthat the bridge will not be built until its plans are approved. “If the plans for the bridge are not approved or serious changes need to be made, the developer is the one at risk.”

Buckeye Lake Development Director Valerie Hans said most residents’ objections are over the proposed bridge’s 7.5 percent grade. Some believe it’s too steep. For comparison, most boat ramps are 14 percent. She said the village is working with the developer to resolve residents’ concerns. Hans expects work will begin on the Landings at Maple Bay some time in August.

The Licking County Planning Commission’s concerns are as follows (with the village’s responses to the concerns):

• There’s been no approved set of plans for bridge and road realignment. County planning has concerns over the sight distance for the entrance to the new development and the existing entrance to Cranberry Point. This may affect the overall layout of the development.

A statement from development engineering firmEMH&T said that representatives from the Village of Buckeye Lake and EMH&T met with Jim Roberts of Jobes Henderson engineering firm. Based on that meeting EMH&T revised the plans and submitted them to Jobes Henderson for approval. The bridge will not be constructed until plans are approved.

• County planners are concerned the development may cause a significant increase in storm water surface runoff. A note from the Licking County Soil and Water Conservation District states there may be a 300 percent increase in runoff based on preliminary calculations.

According to an EMH&T report, stormwater concerns were resolved in a meeting with Dan Blatter of the soil and water conservation district.

• Thirty feet from either side of the centerline of Hunts Landing Road must be dedicated as public right-of-way.

EMH&T submitted plans to the village and the county showing compliance with the 30 feet requirement.

• County planners said the developer offered no written proof that the Army Corps of Engineers has reviewed and approved wetlands delineation.

EMH&T replied that no construction that removes or impacts protected wetlands will begin until the appropriate approvals are secured. Plans were submitted to the Army Corps and Ohio EPA, but final approvals of the developer’s wetland delineations are not expected until autumn.

EMH&T stated that wetlands in the Landings will be mitigated in the Residences.

• County planners said the developer needs to place an emergency access easement leading out of the development should Hunts Landing become impassable for whatever reason. It would only be used if the roadway is blocked. EMH&T complied with two easements.

• County planners also wanted an emergency access easement between the Landings and the Residences, again for emergency purposes only.

According to EMH&T a pedestrian path between the Landings and the Residences will be upgraded to 10 feet wide asphalt path within a 20 feet easement for emergency access.

• County planners want a right turn deceleration lane on Hunts Landing Road to the entrance of the development. EMH&T agreed to provide it.

• County planners said they received no copies of permits allowing for construction of the marina and said the plan for the marina should not be approved by any planning commission until the plan is approved by all necessary authorities. EMH&T provided confirmation of approval of the canal channel construction and 204 docks.

• The entrance of one of the development’s streets needs to line up with the entrance to Cranberry Point, say county planners, but according to village regulations there must be at least 550 feet between intersections. If the development’s street and the Cranberry Point entrance are aligned, there will be less than 550 feet between that intersection and the next one.

A variance was granted.