The question now confronting residents and other observers is whether Council President Kitty Zwissler mixed a “happy hour” cocktail for Finance Committee Chair Tom Wolfe before the August 21 Finance Committee or was she just sharing some of Dr. Masone’s Magic Throat Elixir.

How did we get to this point? It is undisputed that Zwissler had a small bottle of some substance that she poured some portion of into a cup with Coke that Wolfe drank from several times during the subsequent meeting. The handling of the bottle was done stealthily and out of sight of everyone else in the room whom were in front of the dais. The security cameras, which were behind them, caught it all.

Buckeye Lake’s Fiscal Officer Rochelle Menningen hadn’t been able to attend the committee meeting so the next morning she decided to look at the tape. Some other village employees were also interested in what happened. When Mayor Peggy Wells arrived at the office, she found five stunned employees who had just viewed Zwissler and Wolfe’s actions. As Wells was viewing that portion of the tape, Police Chief Vicki Wardlow came into the office and saw it as well.

Wells said she didn’t know what to do. Five employees had seen what appeared to be the council president mixing a drink for the Finance Committee chair. Bringing alcohol into council chambers and then drinking it couldn’t be tolerated. If employees saw two elected officials getting off scot-free, they would have a “get out of trouble” card for any future transgressions. Wells and Menningen both wondered if they had a legal responsibility to report the incident to the Ohio Ethics Commission.

Chief Wardlow’s advice was that when in doubt about the right course of action consult the village solicitor. Menningen recommended the same course of action. Wells agreed and forwarded a copy of the video to Village Solicitor Dan Hayes for this review.

While we have not seen or read his letter to Wells and all council members – it is attorney-client privileged and not a public record – the gist is that council is the judge of its own members. The Charter provides on Page 7 that “Council may remove any member for gross misconduct, malfeasance in office, for the conviction, while in office, of a crime involving moral turpitude, if adjudicated legally incompetent, for a violation of the oath of office, or persistent failure to abide by the rules of the Council.” The letter reportedly included the details of why the video was sent to the solicitor (employees had seen the video). We understand that several council members subsequently viewed the video.

It’s inevitable that when more than a dozen people are aware of possible wrongdoing and when it could taint a larger body (council or village government in general) that word would eventually leak out. That leak becomes even more likely as time passes without any discussion or explanation.

That leak or leaks apparently occurred last week, prompting a resident to ask for a copy of the committee meeting video. That video and an enhanced version turned up on Facebook and YouTube over the weekend.

That brings us to Monday evening’s council meeting. During public comments, long-time resident and community volunteer Marianne Perine brought up the video. “What are we to believe,” she asked. “We would like an explanation.” She talked about “perception” and said it “appeared to be liquor.”

Zwissler flew into a rage, repeatedly referring to her long-time friend, Perine as “Lady.”

“This is exactly what it was. It is glycerin, honey and some tea,” Zwissler yelled as she placed a small dark amber bottle on the front of the dais. The founding members of the Wells resistance quickly came to her aid. “I know who put that out there,” council member Arletta Ruton claimed. “It is very low…”

“I saw Kitty had a cough and I prescribed that to her in the spring,” council member Bob Masone M.D. added.

As public comments continued, former council president and current resister Charlene Hayden continued the deflection campaign. “The video is one of the lowest things I have ever seen,” Hayden declared. “It is absolutely terrible and unforgivable,” she concluded.

Planning Commission chair Karen Cookston added that Kitty gave her some of the concoction for her mother last spring.

Ruton kept the deflection campaign going during council member comments. “It is very low that we have a situation brought up by the attorney…It is very low that these officials are using these cameras for a smear campaign,” she said. When Perine commented that it is the “perception,” Ruton responded angrily. When Perine mentioned “perception” again, Ruton demanded that the 79-year-old Perine be removed from council chambers. Perine voluntarily left. Ruton continued, “I think the cameras need to be taken down.” Her husband, Dave Ruton has been filming council meetings since Wells became mayor.

The Advocate’s reporter present, Maria DeVito, took a photo of Zwissler’s dark amber bottle. She later noticed, as had some other audience members, that the bottle in the committee meeting video is clear. So the mystery remains – a private “happy hour” or Dr. Masone’s Magic Throat Elixir? 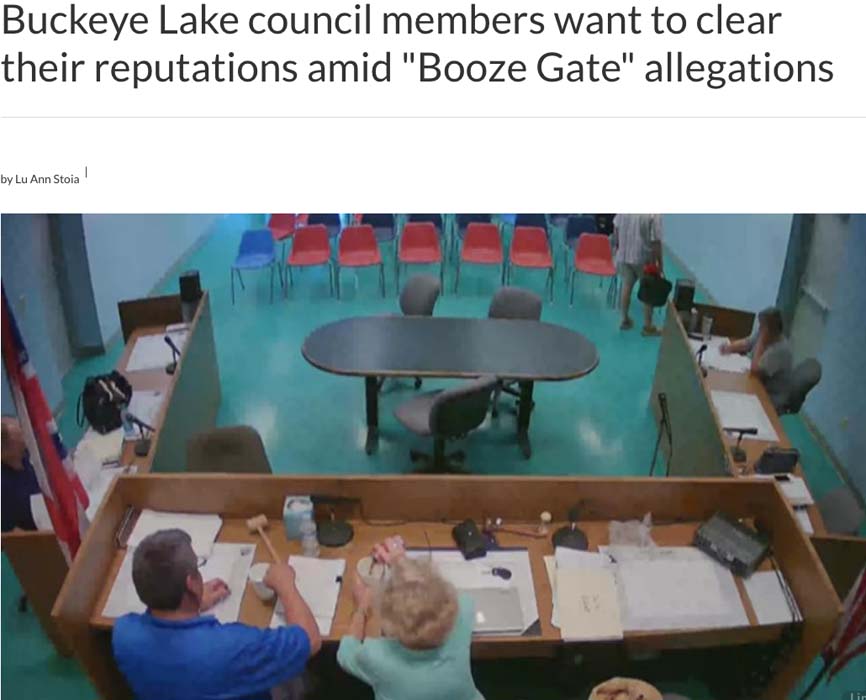