Frozen lake is worth the risk 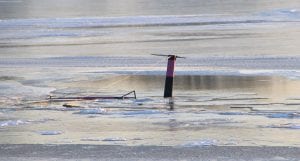 LICKING TOWNSHIP- It’s going to take more than an icy dip in a frozen lake to turn ice boaters Sean Ahern and James McFall into landlubbers. McFall found himself waist deep in ice water Monday afternoon as he and friend Ahern were sailing ice boats across Buckeye Lake. Unfortunately, McFall was skating on thin ice–literally. His boat, owned by Ahern, plunged into the water, leaving McFall stranded about 300 to 500 feet off shore and clinging to his capsized boat until help arrived.

Licking Township Fire Company Chief Mike Wilson said McFall, 63, was “alert and oriented” when the squad arrived. His department worked with the Buckeye Lake Fire Department to retrieve McFall. He didn’t want to go to the hospital, but Wilson said McFall was convinced to go to the Licking County Memorial Hospital emergency room just make sure he was okay. McFall was treated and released that evening with no injuries.

“(McFall) was helping me load up the other boat that night,” said Ahern. “We’ll be back out there; we’re not deterred.” 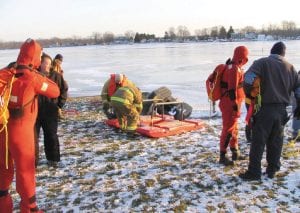 The Tri-County Dive Team pulled the beleagured ice boat from the lake. Ahern said his only complaint about the situation was that he believed the Tri-County Dive Team could have reached McFall before the local squads when he made his 911 call. “I realize it’s a private organization,” Ahern said, but he believes the dive team should be dispatched to emergency situations like any public squad. “I think it’s an issue that the dive team isn’t called.”

M c F a l l wasn’t the only one treading Buckeye Lake water since the temperatures plummetted. Eric Kennedy of Thornville and his 11 year old son fell through the ice near the North Shore Boat Ramp Sunday evening while both were riding an ATV across Buckeye Lake. Father and son both emerged from the water safely with no injuries, but the ATV remains somewhere below the ice.

According to the Ohio Division of Watercraft, there is no such thing as 100 percent safe ice, even for the ice fisherman descending upon Buckeye Lake from all across the state. Nearly 90 percent of boating fatalities are due to drowning and nearly half of those are attributed to the effects of immersion in cold water, according to the division. Water colder than the normal body temperature of 98.6 degrees can cause heat loss. Cold water will cool a body 25 times faster than cold air of the same temperature. If the water is under 50 degrees, the window of opportunity to rescue an unprepared person is only a few minutes.

According to the Division of Watercraft, falling into
cold water triggers the body’s cold water immersion responses, beginning with
uncontrollable gasping. Total immersion in cold water is very painful and the
victim can quickly panic. Also, heart rate and blood pressure increase
dramatically, possibly leading to cardiac arrest. A life jacket can save the
victim from drowning. Should immersion occur, the Division of Watercraft
recommends getting out of the water as quickly as possible. Do not try to remove
clothing or shoes because air trapped between layers of clothing keep the person
afloatand insulated. But, the division advises not to wear a flotation device
when traveling across ice in an enclosed vehicle.