Two of the three metal frame walls for the living quarters for the new fire station on Lancaster Street were pushed over by the strong winds. The adjoining five-bay structure appears to be undamaged.

Construction started several months ago on a five-acre site off Ohio 204 at the village’s southern corporation limits.  The property was donated to the village by the Ricketts Family as part of a larger future housing development.

The new station will replace an aging, cramped and out-of-date station on the northern end of Lancaster Street.  That station was designed for a volunteer department and its living quarters for the 24/7 on-station staff are makeshift.

After years of planning, village officials opened three bids to construct the new station on June 11, 2019. The base bid was for a four-bay station with an alternate for a fifth bay.  The bids were:

Council members unanimously awarded the base contract and the fifth bay alternative to Roma Designs of Cleveland on June 13.  The project is being funded with fire department funds setaside for a new station and a $1,600,000, 25-year loan from the Vinton County Bank. The loan carries a four percent interest rate for the first five years and can be adjusted by a maximum of two percent every five years subject to a cap of eight percent over the life of the loan.  The village is contributing $45,000 a year to repay the loan with the rest of the funds for repayment coming from the Walnut Township fire levies allocated to the department.

Work began in July on site preparation which included the installation of a storm sewer as well as sanitary sewer and water service. The structure started to take form last month. 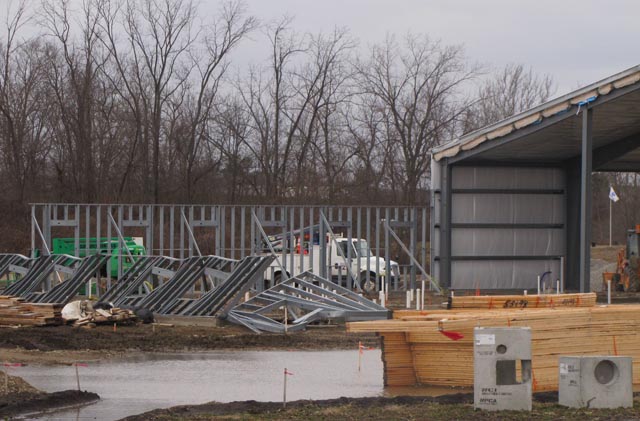 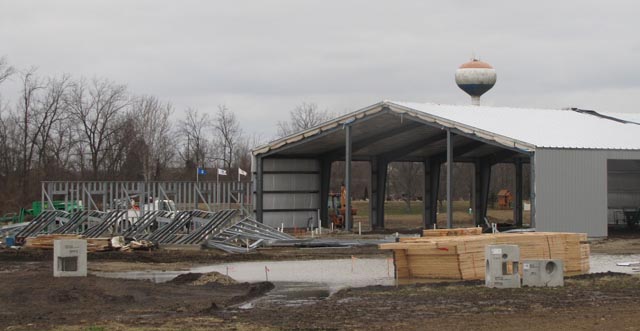 Gusting winds pushed over the southern and eastern metal frame walls for the living quarters at the future Millersport Fire Station on December 30. Beacon photos by Charles Prince.