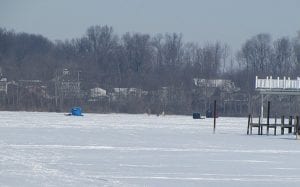 BUCKEYE LAKE– Ice fishermen finally had a chance to get their hooks into Buckeye Lake as this winter’s extreme cold created an ice cap roughly a foot think in most areas of the lake.

“They’re doing really well,” said Mike Watson, who works in Vance Outdoors of Hebron’s fishing department. “They’ve really hit us good this year.” Watson said the lake is rarely this frozen and winter anglers are taking full advantage. Not surprisingly, Watson said ice fisherman are catching the same species of fish as they would the rest of year, including perch, crappie, and saugeye. Amazingly, the fish are still active under the ice during subzero temperatures. “They’re not moving as fast as usual, though,” he said.

According to the ODNR Division of Wildlife, savvy anglers know that preparation is the key to grabbing their chance to enjoy this fleeting fishing opportunity or else to be left, quite literally, out in the cold. “If it is going to get cold enough to create fishable ice, January and February are the months to bet on,” according to Ray Petering a state fisheries biologist and avid ice angler. 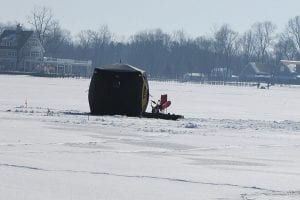 For those just getting started in this exciting winter sport, it’s not necessary to spend a lot of money on fancy gear, says Petering, who admits to “recrafting” broken rods for use during ice fishing season. He explains that angling through a hole in the ice is a lot easier with a shortened pole. Shorter rods are more maneuverable, allowing anglers to get closer to the hole while providing them a better feel for what’s at the end of their line.

Because fish don’t strike as aggressively in the winter, you’ll want to use lighter tackle – 10 pound test or less – and smaller baits. You can increase your odds by tipping artificial lures with live bait. Sluggish fish are much more likely to hit on a minnow-tipped jig as opposed to one with a plastic worm. 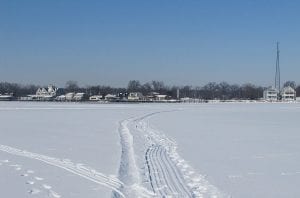 Tip-ups are another common method of ice fishing and come in a wide variety of designs. Essentially, they involve a spool of line hanging in the water with bait attached. Most store bought versions feature a signaling device, such as a flag, that pops up when a fish takes the bait. In Ohio, anglers can have up to six tip-ups going at one time.

What’s biting down below? Petering says you can catch the same species when ice fishing as you hooked during the summer months, including crappie, bluegill, bass and catfish, as well as perch, walleye and saugeye.

In fact, some of the most sought after ice fish are saugeyes (a cross between the sauger and a walleye), because they are so active in the winter.

ODNR and its emergency response partners advise that extreme care be taken anytime while out on the ice, especially on Lake Erie. No ice is ever completely safe, and any ice that is covered by snow should always be presumed to be unsafe.

Ice seldom for ms at a uniform rate, which is especially true on large bodies of water such as Buckeye Lake. ODNR recommends that any person heading out onto the ice should follow these safety tips. Additional safety tips can be found online at ohiodnr.gov.

• Contact a local ice guide or bait shop to ask about ice conditions.

• Adequately check the ice thickness before traveling onto the ice.

• Dress properly for conditions, which should include wearing an approved life vest.

• Carry a fully charged cell phone in a protective cover.

• No ice is safe ice. Ice thickness varies across a lake. Ice near the shore tends to be much weaker because of shifting, expansion and heat from sunlight reflecting through the ice. Avoid areas where there is water flow beneath the ice and where in-water obstructions (i.e. bridges pilings, docks and dam structures) may be present since ice is usually thinner around these objects.

• Always fish with a partner or in an area where several other anglers are present.