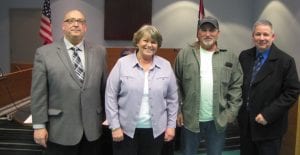 Former Hebron Mayor and current Council Member Clifford L. Mason was appointed by Mayor Peggy A. Wells as interim fire chief. Mason has a long career in the fire service. He is currently retired after serving as the fulltime fire chief at Perry, Genoa and Madison townships in Delaware and Franklin counties. Mason is also a former president of the Ohio Fire Chiefs’ Association.

He fills the vacancy created by the unexpected death of Fire Chief Richard “Pete” Leindecker Jr. who passed away on March 30. Leindecker had been on medical leave for most of the new year. He served as the village’s part-time chief for 23 years.

North Bank resident Doug Stewart is the village’s new zoning officer. He replaces Bob Jordan who retired from the part-time post late last year. Stewart gave up his position on the village’s Planning and Zoning Commission to accept the post.

In other business Monday night, Rich Hennosy, owner of the Buckeye Lake Brewery, made a pitch to council members to purchase a 0.46 acre tract of village owned property that includes the recently closed Lake Drive-Thru.

He explained that the brewery has already outgrown its production space in the Dollar General building that borders the north side of the village complex. Buckeye Lake Brewery is distributing to 200 outlets in central Ohio and wants to distribute state-wide. Hennosy said his brewery purchased $3,500 worth of water from the village last year and his planned facility would increase production 10-times.

The new facility would pro- vide more in-door and out-door seating and allow regular tours. He warned council members that he would have to move the new production facility to another site, likely outside the village if he is unable to purchase property from the village.

Hennosy presented a property appraisal done by Bradley M. Stubbs, MAI, SRA with Stubbs Valuation Services, Inc. of Zanesville. Stubbs valued the property at $60,000 based on three comparables – one on Cedar Park Blvd. in Etna, one on West National Drive in Newark, and one on East Main Street in Newark. Hennosy said he would offer a 15 percent premium to the appraised value for a total of about $70,000.

The village was renting the drive-thru for about $1,000 a month until the operator closed last month.

Council members didn’t immediately comment on Hennosy’s offer. But during council member comments at the end of the meeting, Robert Masone MD said, “The drive-thru land is very valuable. The number should have two commas in it…It is clearly a million dollar piece of property.”

Council member John Geiger also said the property was worth more than what Hennosy offered. Resident Jane Simmons said the brewery has been a great addition.

Council member Doug Poorman DVM, chair of the Community Development Committee, said last Saturday’s dedication of the new lake-area community center – The Harbor – was well attended with lots of interest in its programs and services. Licking County Aging will be providing free lunches weekdays to anyone age 60 or above. However, they will need 5 – 10 regulars each day to justify the service. The free lunches are available to any Licking County residents. While the center is open to anyone in the tri-county area, Fairfield and Perry county residents would have to pay a small fee for the lunch program.

Attorney Larry Arnold of Harbor Hills, who has been representing Police Chief Jimmy Hanzey, appeared representing former Police Officer Jeff Vermaaten. Wells fired Vernaaten late last month after he refused to take a CVSA voice stress analysis as part of the internal affairs investigation into the department being conducted by the Pataskala Division of Police. All Buckeye Lake officers had been ordered by Wells to cooperate with the investigation. Both he and Hanzey were informed of their Garrity rights which means that any ordered testimony can not be used against them in a criminal proceeding. Their ordered testimony can be used to discipline them or terminate their employment. Wells gave Vermaaten a second chance to submit to the test or resign instead of being fired.

Arnold introduced Douglas Wells of Hebron, a retired polygraph examiner with the Columbus Division of Police, the Ohio State Highway Patrol and the Ohio Inspector General’s Office. “The State Patrol has never used it (CVSA),” he said. Wells, no relation to the mayor, added that there is no evidence that it is more accurate than chance. He acknowledged that many agencies use CVSA. Wells added that he had never heard that a CVSA examination was admissible in court. However, Wells said failure to take a polygraph or CVSA is an act of insubordination.