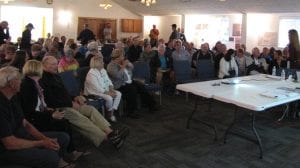 It was standing room only at Wednesday’s mid-term presentation on DLZ’s Charrette process with Buckeye Lake 2030. Beacon photo by Charles Prince

BUCKEYE LAKE – Most Buckeye Lake area residents had never heard of a “charrette” until a few weeks ago.

Its French origin basically means a “cart” according to oxforddictionaries.com. But now it’s come to mean “a public meeting or workshop devoted to a concerted effort to solve a problem or plan the design of something.”

When 8 p.m. comes around Friday evening, hundreds of Buckeye Lake residents and property owners will have participated in the “charrette” organized by Buckeye Lake 2030.

DPZ of Miami, Florida, has developed “The Charrette” to organize the planning process. The one-week process here costs $175,000 with $150,000 coming from economic development grants from the State of Ohio and federal Department of Commerce. The $50,000 balance came from private donations to Buckeye Lake 2030.

The nationally and internationally known DPZ design team arrived Sunday. The intensive process started with an area tour including Granville and Newark. Six designers listen to the presentations, consult individually with participants and draw designs based on that input. The designs are shared publicly and revised and expanded based on that feedback and additional design work.

• Monday night was the opening presentation, describing the process and the goals;

• Wednesday night was the mid-term presentation that included specific design suggestions for the four focus areas – Downtown Millersport and along the canal; Fairfield Beach with an emphasis on public recreation; Thornport; and the Ohio 79 corridor in Buckeye Lake Village, from I-70 to the Yacht Club’s Eastport boat yard.

In addition to the three evening sessions, there were four more focused sessions Monday through Thursday for elected officials, business owners, government officials, developers, realtors, engineers etc. The last one is set for 10 – 11 a.m. on Thursday, focusing on the Environment/ Natural Assets.

More than 100 residents and property owners turned out for Wednesday evening’s mid-term presentation. DPZ’s Managing Partner Galina Tachieva presented some detailed designs for the target area in Buckeye Lake Village. The four-lane Hebron Road entrance to the village is being called Buckeye Lake Boulevard. Tachieva said, “Hebron is north of here.” She added that traffic counts don’t justify two lanes in both directions, so one lane in each direction would be turned into a bike lane and a tree-studded parking lane.

The new entrance goes into a new village square built around the old amusement park fountain now stuck between the two North Shore parking lots. Tachieva said the design will allow people to actually see the lake as they travel down Buckeye Lake Boulevard,

Other design highlights included a long pier into the lake at the North Shore with a multipurpose building on the end. The pier would also be the home for Buckeye Lake Historical Society’s new paddle wheeler.

The Buckeye Lake Yacht Club’s Eastport boat yard would be a great location for a hotel, Tachieva explained. There would be mixed in-fill residential and retail development along Buckeye Lake Boulevard and south of the new village square.

“You need buildings to create space,” particularly safe space, she explained. Design clusters would be built around what Tachieva called “pedestrian sheds that take five minutes to walk across. “Everybody can walk for five minutes.”

The most ambitious proposal, according to Tachieva, is for Fairfield Beach. Two options incorporate a four or eight acre Crystal Lagoon on state park property. The lagoons would be sealed off from Buckeye Lake water, offering clear water for swimming and water sports plus some artificial islands

Design ideas for Millersport include an arched wooden bridge for bikes and walkers at the mouth of the canal. The bridge would connect with State Island and Lieb’s Island. The area around the Island House could become a fishermen’s village. The canal would be bordered by a walkway. An amphitheater and state lodge are envisioned for State Island (current state park office/maintenance facility and a large dredged material relocation area).

Want more information about these designs or to see how they are fleshed out? Come to Friday night’s closing presentation from 6 – 8 p.m. at First Community Church on Ohio 79 across from the KOA Kampground. Most of the design work will end up on Buckeye Lake 2030’s website at buckeyelake2030.org