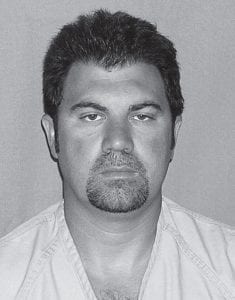 The U.S. Marshals Service provided this booking shot of Joseph Marasco. A similar photo of Robert Fusner was not available at press time.

AVONDALE – A popular Buckeye Lake nightclub remains in operation following the arrest of its legal owners.

A federal grand jury indicted Captain Woody’s owners Joseph Marasco, 42 of Pataskala, and Robert Fusner, 33 of Grove City July 16, alleging that they conspired to traffic in illegal drugs and launder the proceeds of the crime, as well as filing false income tax returns, according to a US Department of Justice news release.

According to the news release, another count in the indictment alleges that the men conspired to launder money in a scheme involving the submission of false insurance claims. Each man is also charged with three counts of filing false income tax returns for 2001, 2002, and 2003. Conspiracy to possess with the intent to distribute drugs is punishable by a minimum of five years in prison and a maximum of 40, plus a maximum possible fine of $2 million. The potential penalty for money laundering conspiracy is 20 years imprisonment. Each of the tax crimes is punishable by up to three years imprisonment.

According to one of a total of 10 counts against Marasco and Fusner, the two men possessed with intent to distribute more than 500 grams of cocaine and 100 kilograms of marijuana in 1997. Another count alleges the men spent drug money on a two-seat Mercedes-Benz, a 2001 Z06 Corvette, and a Mercedes- Benz E55, a boat, and Captain Woody’s. Still another count alleges Marasco and Fusner filed a false insurance claim alleging the theft of a 1997 Pontiac Trans Am insured for $64,000. It was part of the conspiracy, according to the indictment, that Marasco would provide two motorcycles to a person not charged in the indictment in exchange for the insurance proceeds plus $10,000. Fusner would pay $10,000 for the Trans Am. Several tax fraud charges stem from Marasco and Fusner not claiming revenue they received through drug sales.

Fred Alverson, public affairs officer for the US Department of Justice Southern District of Ohio, was clear that Robert “Pedro” Mar, Captain Woody’s general manager, “is not implicated in any wrongdoing,” and there is no implication that any drugs were ever sold from Captain Woody’s premises. “Captain Woody’s was only a place to launder money,” said Alverson, although Mar said he didn’t believe that the establishment was purchased using drug money.

Mar said he hopes people keep in mind that everyone is innocent until proven guilty and he said the club will continue to operate normally “until someone says otherwise.”

Alverson said both Marasco and Fusner were released on their own recognizance following arrest.

Matt Mullins, spokesperson for the Ohio Division of Liquor Control, said there a January 2008 request to transfer Captain Woody’s liquor permit from Marasco and Fusner’s 1055 Avondale, Inc. corporation to Gee W. Mar, Robert Mar’s father, is still pending. Gee Mar is listed as the managing member of Buckeye Lake Tavern, LLC. Mullins said Captain Woody’s could continue to operate while the federal charges are adjudicated. “There is a process,” said Mullins, which can be lengthy.

Also, Alverson said there is no forfeiture count, meaning federal officers have no plans to seize any of Captain Woody’s operational equipment. This is good news for Mike Hostasa, who owns the property, building and most of the club’s equipment. Hostasa is not implicated in any wrongdoing whatsoever, either.

Licking Township Trustee Dave Miller said the township requested a local hearing on the proposed license transfer to Gee Mar. Township officials and some residents contended that the establishment was a “nuisance” to those who live near it. However, the subject of the hearing was on Mar’s fitness to hold the permit, not it’s current operation. That issue can be raised in February when the permit is up for renewal. Miller believes residents could circulate a petition to place an issue on the ballot to “dry up” Captain Woody’s.

Licking Township resident Erna Holland, whose property shares the shoreline near Captain Woody’s, said she hasn’t heard from many residents who want the establishment to be closed. “I don’t think it’s anybody’s mission to shut it down,” she said. “They just need to run a good business.” Holland said most of the residents enjoy the social life around Buckeye Lake; that’s why they live there. Holland doubts enough residents would favor shuting down Captain Woody’s or any other establishment in the precinct. Residents just want the local nightlife to be reasonably managed, she said.